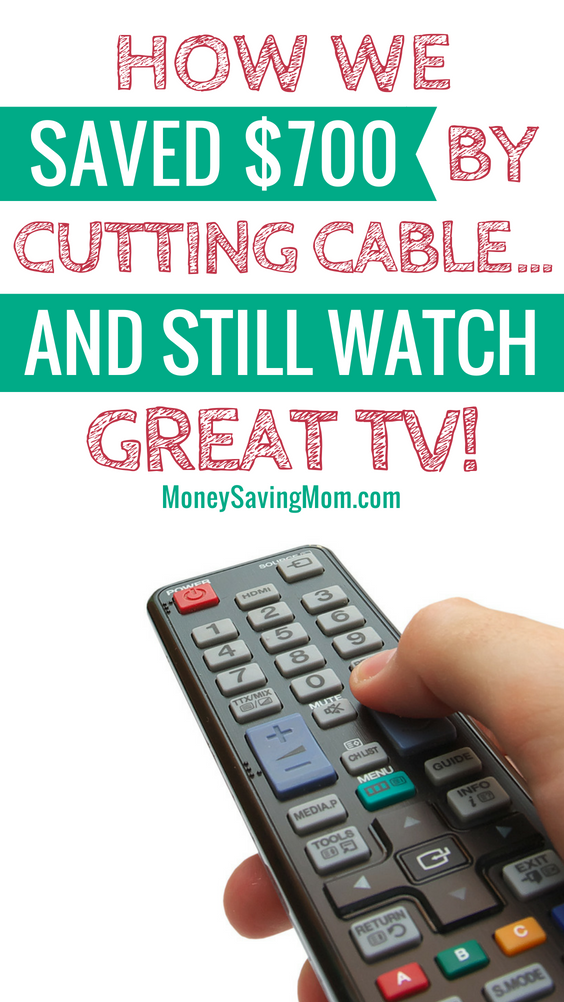 Guest post from Abby of Just a Girl and Her Blog

When my husband and I decided to get serious about budgeting, one of the first things we cut out was cable.

Still wanting access to some form of at-home entertainment, we weighed our options and finally came up with a solution that saved us almost $700 this year while still watching great TV!

Here’s how we did it:

When we decided to drop cable, we had the infamous “bundle” plan which gave us a reduced rate because we held our cable and internet with the same company. We were worried that we wouldn’t be able to find an internet-only option that made dropping cable worthwhile, but after a little bit of calling around, we were able to get a deal with Comcast where we paid $30 a month for internet only instead of the $103 we were paying for internet plus cable through Verizon.

We looked at Netflix, Hulu Plus, and Amazon Prime. We ultimately chose Amazon Prime because along with video streaming, free two-day shipping, and the Kindle Lending Library were also included in the $79 yearly fee.

Roku is a little box that hooks up to your television and allows you to stream videos via your subscription service straight to your TV. It also offers additional TV and movie programming, a lot of which is free. (And have I mentioned no commercial interruptions?!) We purchased the Roku HD for $60.

4. Get a Leaf for local channels.

The Mohu Leaf is a flat antenna that we were able to mount behind our TV in order to pick up our local stations in HD. (Yep, high definition from a digital antenna!) My hubby especially loved this feature because he didn’t have to completely give up live sports.

We live in Pittsburgh (hello, hills!), so rabbit ear antennas weren’t really an option for us; however, since the Leaf gets about 10x better reception than standard rabbit ears, we probably would have gone with it anyway. We found our Leaf for around $40.

So let’s do the math:

I was hesitant to start the process in the beginning because it sounded like a lot of work, but once we figured out how much we’d save without much sacrifice, it was well worth it. And since we won’t have to factor the cost of the Roku or the Leaf into next year’s budget, we’ll save even more!

Could we have saved more by getting rid of TV altogether? Yes. But for those of us who still like to have an at-home entertainment option, this strategy is a great way to go!

Abby Lawson is the author of JustaGirlandHerBlog.com where she shares her creative ideas, DIY projects, activities for the kiddos, and random happy thoughts. She lives in Pittsburgh, PA with her husband and two little boys, ages four and one.