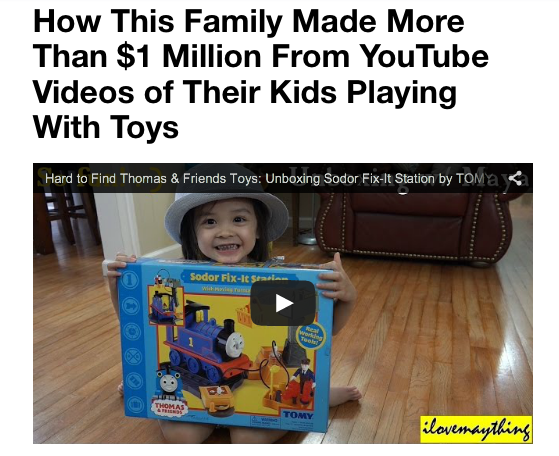 So, this is pretty amazing! One family found a creative way to turn YouTube in a very lucrative income source for their family. Here’s a snippet of the article that Yahoo! posted today:

One couple has turned their passion for home movies into a lucrative career — banking more than $1 million from their YouTube channel that’s probably best known for videos of their kids playing with Thomas the Tank Engine toys.

Mark and Rhea, who go by the YouTube username “ilovemaything,” are the parents behind the popular YouTube channel Hulyan Maya. In fact, “popular” may be an understatement: According to Tubefilter, which posts weekly charts of the most-viewed YouTube channels, the Hulyan Maya channel was the 42nd most-viewed U.S. channel last week. With more than 26 million views in just seven days, it fell just below the channel for NBC’s The Voice.

The channel, which averages more than 3 million views a day, features Los Angeles parents Mark and Rhea (who chose not to reveal their last name to Yahoo Parenting) and their three children, 5-year-old Hulyan, 3-year-old Maya, and 5-month-old Marxlen. The majority of the videos — which are often more than 15 minutes long — feature the kids playing with Thomas the Tank Engine or Monster toys.

Read the rest of the article here.

I think some of the keys to this family’s success is not only their consistency in posting every single day, but also in posting on a subject that has strong search terms (i.e. probably a lot of people search YouTube for specific toy names).

Have you ever tried posting videos on YouTube? Have you made any money doing so?