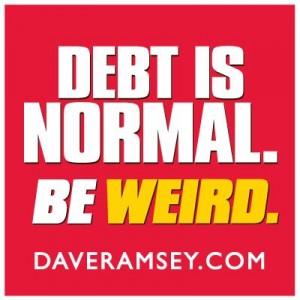 We purposefully waited to look at houses until we had saved 100% of our goal for our house-fund. Because we were committed to staying out of debt and paying cash for a house, we didn’t want to put ourselves in a situation where we looked at houses, fell in love with one and then were tempted to go borrow money in order to buy it (yes, we’re unabashedly weird like that!).

So we waited until we were completely ready and our house fund was fully-funded. And when we finally hit our goal at the beginning of the year, we’d been renting for seven years. Most people expected us to go right out and buy something almost immediately since we were finally ready to do so.

But we weren’t in any big rush. Sure, it would be nice to move to something a little better suited to our needs than our current rental, but we wanted to wait and find something we really liked and knew without a doubt was THE house for us.

We were initially thinking we’d find a house within a few months — if not sooner — but we quickly learned that when you’re paying 100% down on a house, you’re not in a big hurry to part with that money until you know you’ve found a house which you love.

So we waited, we prayed and we continued to look at houses.

After about five months of looking, I was getting a little tired of people asking “Have you found a house yet?” In fact, sometimes I felt like that mother who is pregnant and past her due date and people keep coming up and saying “When are you going to have that baby??”

I also was finding that we’d worked so hard for this big goal and now it felt like we were in a holding pattern. Going nowhere, getting no traction and without purpose. It wasn’t that we weren’t still saving money, it was just that we’d put a lot of our financial goals on hold until we found a house — since we wanted to have extra padding in our house budget to account for the additional expenses which might present themselves (necessary costs, moving expenses, work which would need to be done to the house, etc.)

When I talked to Jesse about this, we decided to sit down and map out a specific future game plan for our finances — even if we hadn’t found a house yet. We needed purpose and drive and goals. Without them, we were feeling a little aimless and slacking in sticking with the budget.

So we laid out specific dates for other financial goals and started working towards those. And almost immediately, the momentum was back and my frugal zeal returned!

And would you believe it? Within days of our “money meeting”, THE house went up for sale. And we signed a contract on it within 48 hours!

I guess you could say that we weren’t in a hurry until we found THE house — and then we certainly didn’t dawdle. How it all came to be is a bit of a wild story and still has us shaking our heads and pinching ourselves. But I’ll save all those details to share with you next week.