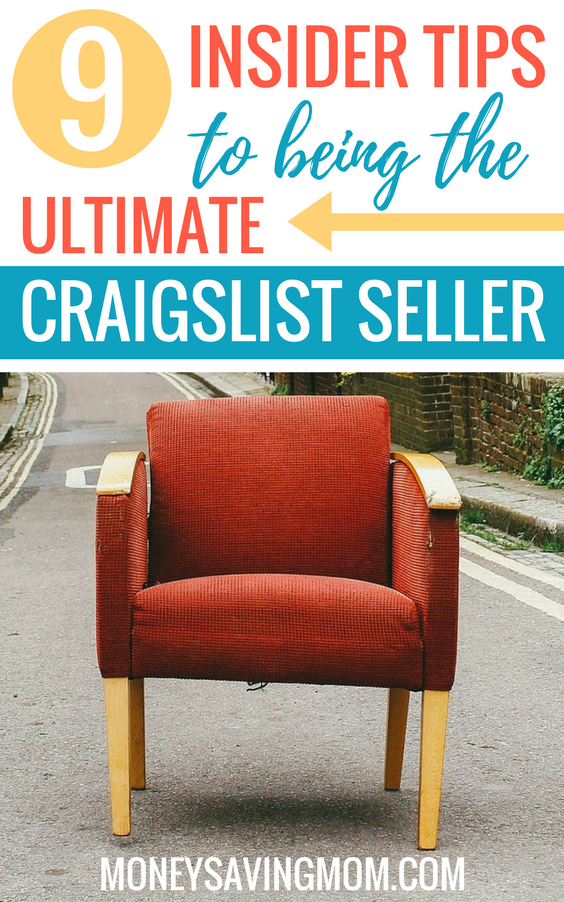 Have you been to Craigslist? It’s like the ultimate online garage sale! We’ve used it for several years now and have bought and sold pretty extensively. It’s a great way to make a few extra bucks and declutter at the same time.

In all the transactions we’ve done, I’ve learned a few tips on selling that I hope are helpful to you:

Use a “real” digital camera, not a cameraphone or otherwise poor quality camera. A fuzzy photo makes people wonder what you are trying to hide, even if you’re not trying to hide anything!
Take several different photos (the maximum is four) from various angles. I can’t tell you how many times I’ve seen a horizontal photo and a vertical photo taken from the exact same angle.

Your leather couch that your dog has chewed on is not going to go for the same price other leather couches without teeth marks are going for.

Disclose any flaws that you know of. Don’t say, “I paid $1000 for it 5 years ago and I only want $750!” If you think you can get that great of return on something you’ve used for 5 years, please don’t say how much you paid for it. In my opinion, it is rarely a good idea to quote the original price. It can almost always be used against you.

3. Note what area of town you are in.

There is a place on the form to do this. Are you north, south, east, west? What neighborhood? “Rockrimmon” gives a lot more information than “West Colorado Springs.” And by the way, everyone else in the world is not a zip code geek like you so putting only your zip code down is silly because very few people are going to know what part of town that is!

4. Be ready to respond to inquiries.

If your item is in high demand, you will often get ten or more emails in the first hour or two. If someone is already trying to ask for a lower price, or wants to know a hundred things more about it, I don’t waste time on them unless they are the only inquiry.

Although it is considered courteous to offer the item on a first-come, first-served basis, if there are more than a few responses I usually skip over anyone who gives any indication they will be difficult to work with, such as wanting a discount before seeing the item, difficulty in arranging a time to pick up the item, or asking a myriad of questions that are irrelevant for a used item that’s being sold for a fair price.

6. Specify when you want to get rid of it.

We had over 25 inquiries the Sunday afternoon we posted an ad for a mattress. I promised it to the first person I emailed, and they were going to pick it up that night. They called later and wanted to know if they could pick it up the next day, which was fine but then they didn’t show up.

We were finally able to sell it to someone else on Monday, but it was maddening to sit at home thinking someone is going to come by our house to buy something and then they don’t show. We started putting something like: “The first person who’s able to come get it by tonight gets dibs!” on the ad to prevent something like that from happening again.

7. Save your “back-up buyers” emails.

Sometimes you will have someone not show up, or cancel, or decide they don’t want it. In that case, you could post it again, or if you’ve saved the emails other people sent, you can just email them all directly and and re-offer it to them. If the item has already been promised to someone but hasn’t been picked up yet, I will usually email any further inquiries and tell them it’s pending pick up, but that if there is a no-show or something I will email them back.

8. Meet at a location other than your home.

There are two reasons for this. One, you never know what kind of person is going to show up to buy the baby crib you’re selling. Two, it is easier to tell someone to meet you at the McDonald’s at a certain intersection than to give them directions to your house. Be sure to pick a place that is convenient for you.

If your item doesn’t sell, re-post it according to the guidelines. If you’ve posted it twice with no response, it probably means no one wants it or you are asking too much.

As a buyer, it gets really annoying to see the same exact postings get posted every couple of days with no change–no new pictures, same description, no price adjustments. I have seem people post the same thing every day for a month, and I have to wonder if they really want to sell it or if they just like posting stuff!

Carrie Isaac blogs about deals in Colorado Springs at SpringsBargains.com.

photo by Unhindered by Talent