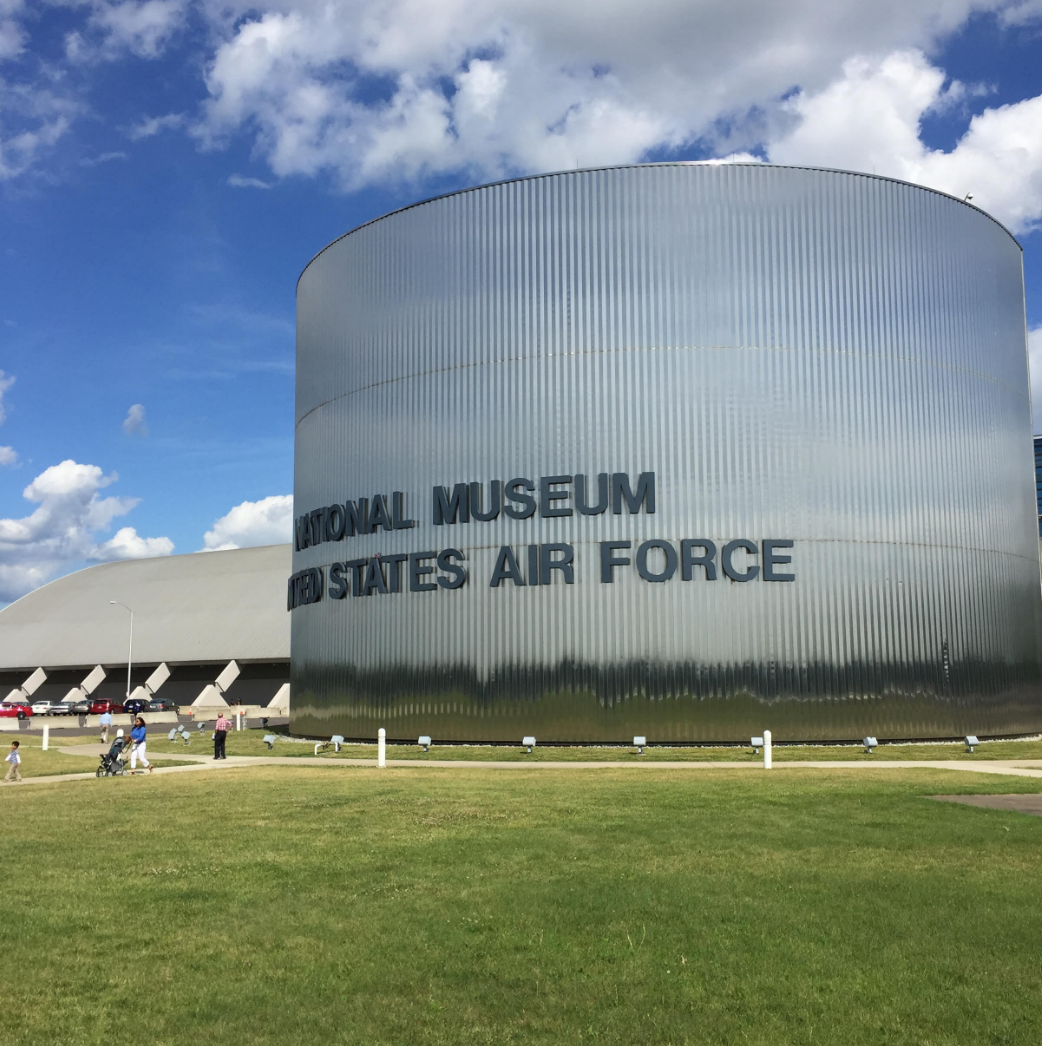 A few weeks ago, we drove to Ohio for an ice-skating competition that Kaitlynn was competing in. Jesse had asked me if we could drive down a day early because he’d heard about this museum in Dayton called the National Museum of the US Air Force that he wanted to check out.

I told Jesse that would work for us to go a day early but I didn’t know whether I’d be able to go since I might be so backlogged on work and projects that I’d need to stay at the hotel. {My full-time assistant was completely offline that week on a hiking trip and one of my other part-time assistants had a baby. So I was in over my head trying to do my normal tasks and projects, blog, and take care of a multitude of extra responsibilities.}

I didn’t want to have to miss out on the museum and time with the family but the reality of having your own business is that there are many blessings and a lot of flexibility, but there are the occasional drawbacks — like weeks when you have to pull double shifts!

Jesse was very understanding as we’d known this very, very busy two week period was coming and I was already having to shift a lot of things around in order to be completely present for Kaitlynn at her competition. 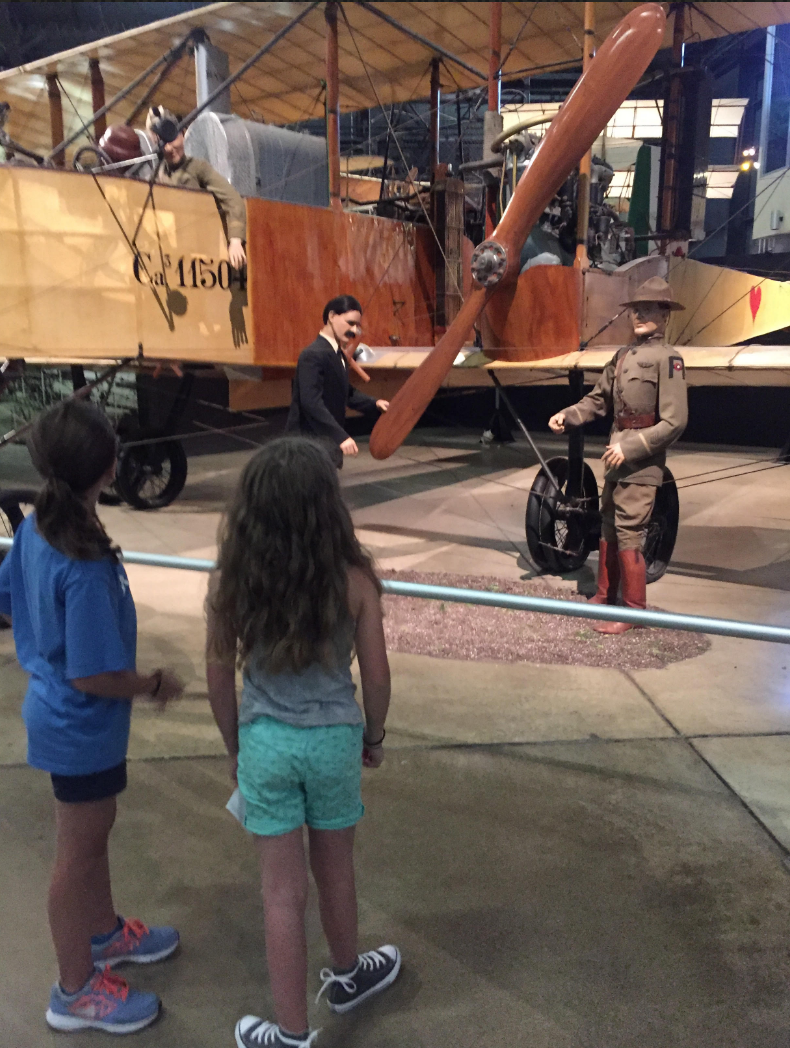 Because I didn’t even think I’d probably get to go to the museum, I didn’t research it at all. In all honesty, what Jesse had told me (“It’s a museum about the USAF and there are a lot of planes.”) didn’t sound all that exciting or interesting. I’m not much of a museum person if it’s just planes or old historical artifacts, so I doubted I would miss much.

However, I really, really wanted to get to go to the museum just to have that fun memory with the kids and Jesse — even if the museum was going to be really boring to me. So I worked late in the evening the night before and was able to get everything done so I could take the afternoon and evening off.

I had asked Jesse that morning, “So how long do you think we’ll be there?” He responded, “I can’t imagine much more than a few hours.” We decided to get to the museum around 1 p.m. since it closed at 5 p.m. and that would give us four hours there. We figured that should be ample time.

Then we pulled up to the museum and realized it was more like a MUSEUM COMPLEX than a museum. In fact, there were four huge buildings and lots and lots of cars and people.

Oops. Apparently it wasn’t the little plane hangar we had envisioned! 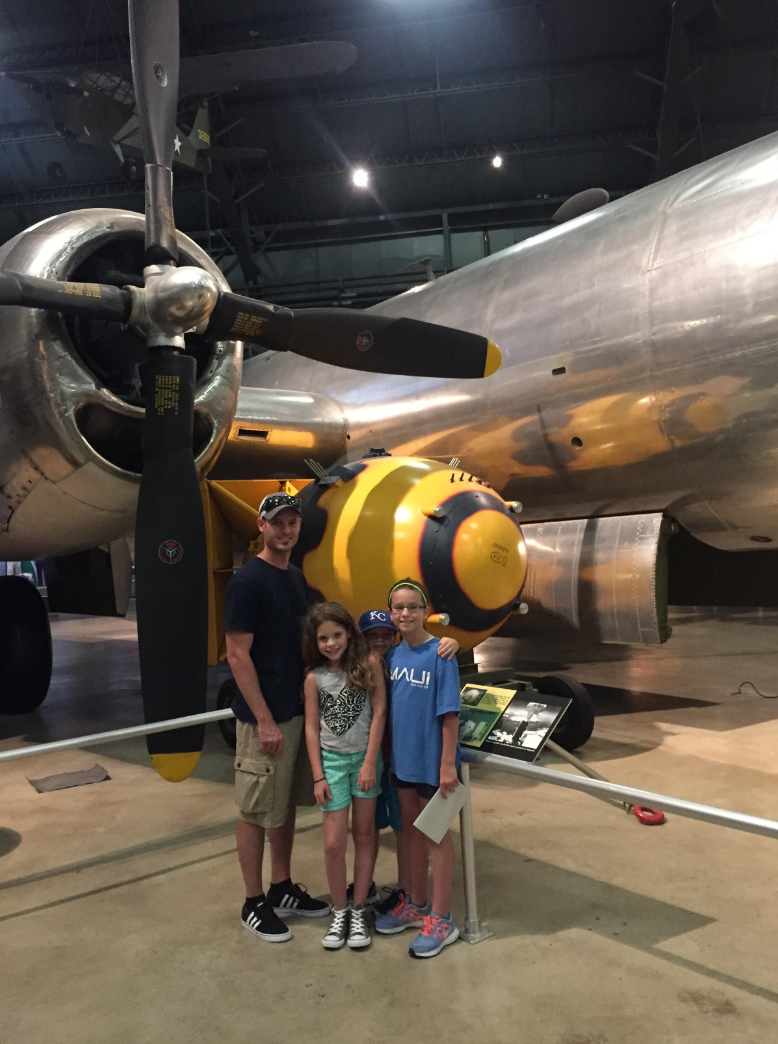 We found a parking spot, trekked inside, and went to buy our tickets to the museum. With how big and nice it looked, I was now concerned that the price of admission was going to be much more than we were expecting. My guess was something like $20-$30 per person. And I was kicking myself that we were only going to be there for four hours if we were going to pay that kind of money to get in.

Imagine our surprise when the guy at the information desk said, “Oh, there’s no admission price. It’s FREE!”

FREE??!! Jesse and I looked at each other and realized that things were off to a good start!

Then, we looked at the map and saw more about what the museum was about. Yes, there were lots and lots and lots of plane, but I was so surprised to see that they had a whole, huge section dedicated to World War II.

If you don’t know, I’m a huge World War II buff. I’ve read countless books and am fascinated by anything to do with that period in history.

FREE + World War II? You better believe I was happy that I came!!

Note: There is a charge for the Air Force Museum Theatre and flight simulators, if you want to do those. Otherwise, everything else is entirely free! 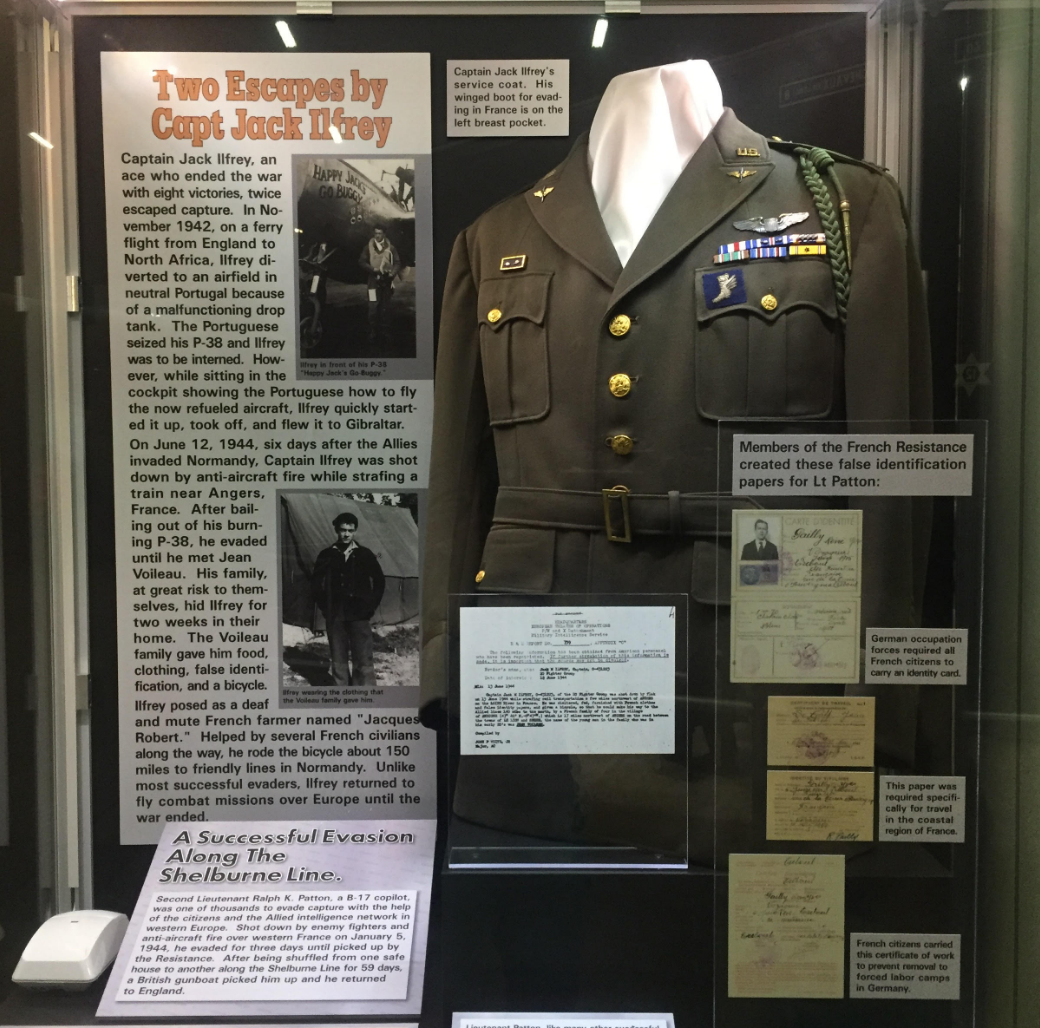 Early Years Gallery — The museum started with a history of flight and how planes used in wars in the early days. It was really interesting to see how quickly technology had advanced in such a short amount of time. It was also hard to imagine how scary it must have been to fly some of the early models of planes — especially during the wars.

Korean War Gallery, Southeast Asia War Gallery, Cold War Gallery — We ended up having to skip these exhibits because we didn’t have enough time, but we would have LOVED to have go through these. The little that we saw of them looked amazing and we all agreed wholeheartedly that we wished we had had two days to explore all the exhibits! 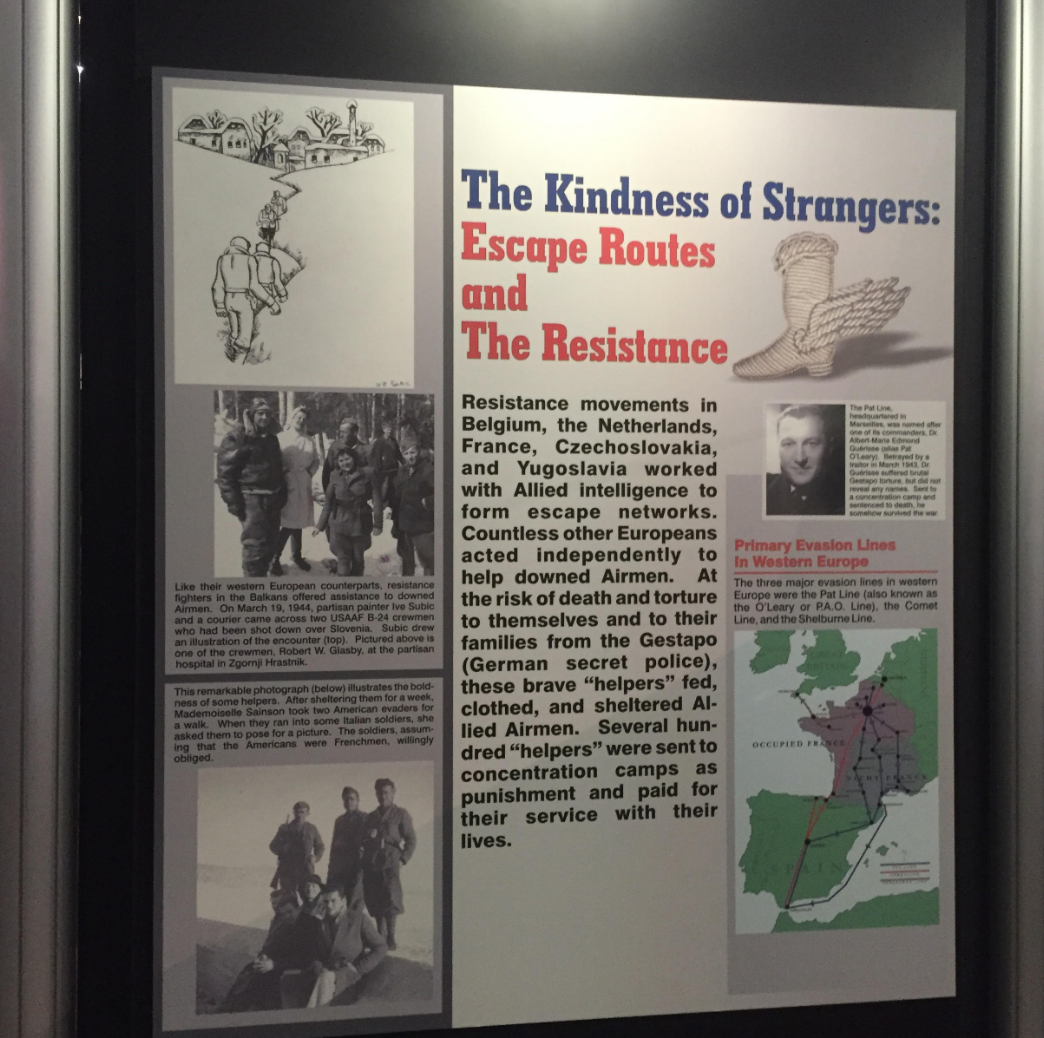 World War II Gallery — We all absolutely loved this exhibit. It was incredibly interesting, very well done, and very informative. And even though I’ve studied and read so much about World War II, I still learned a lot.

We found the section about downed pilots who escaped enemy territory without being caught to be riveting. They showed different methods and means that these pilots used to travel through enemy territory to safety. There were also lots of intriguing facts about prisoners of war and prisoners who escaped.

There was a traveling exhibit dedicated to the Holocaust that was really touching — especially for our kids. For them to see photos and footage of what happened during the Holocaust impacted them in a pretty powerful way. 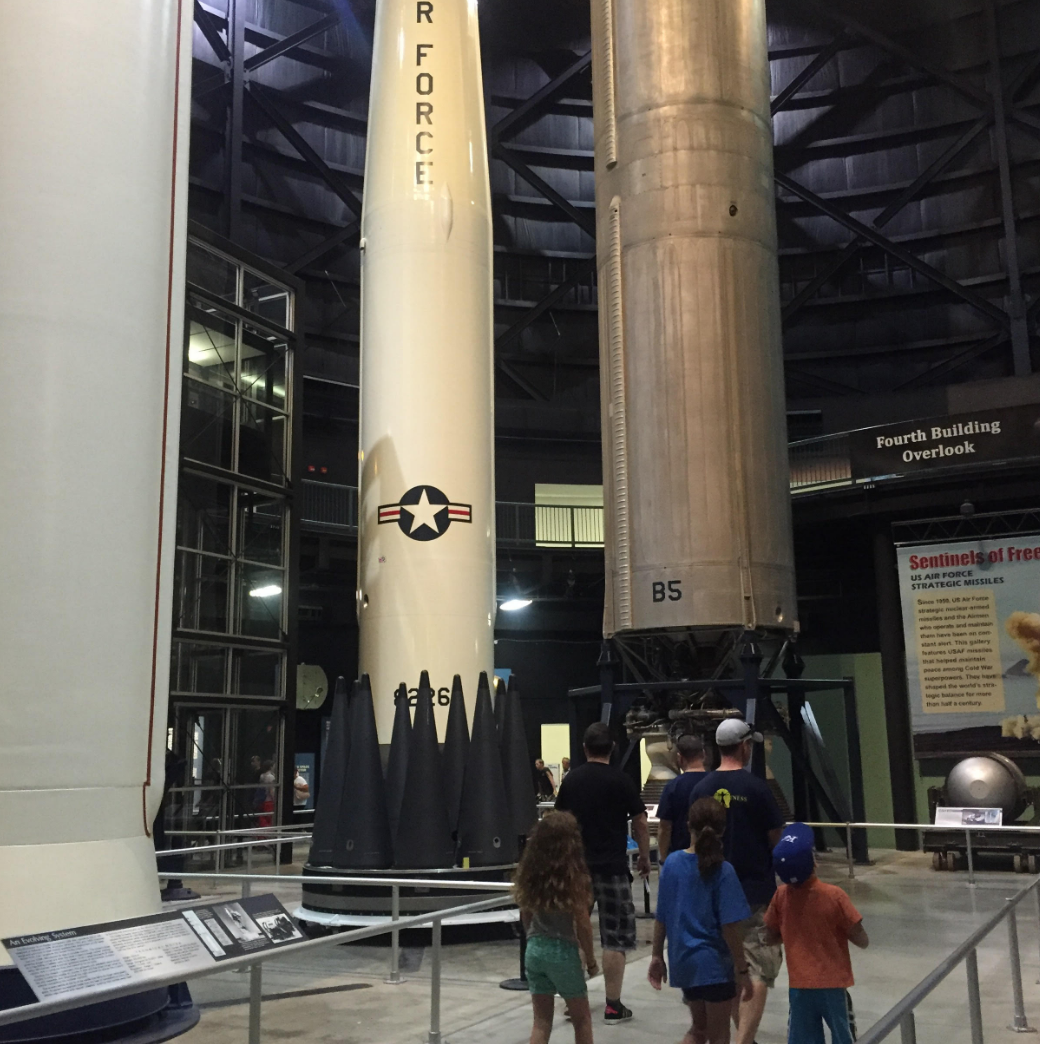 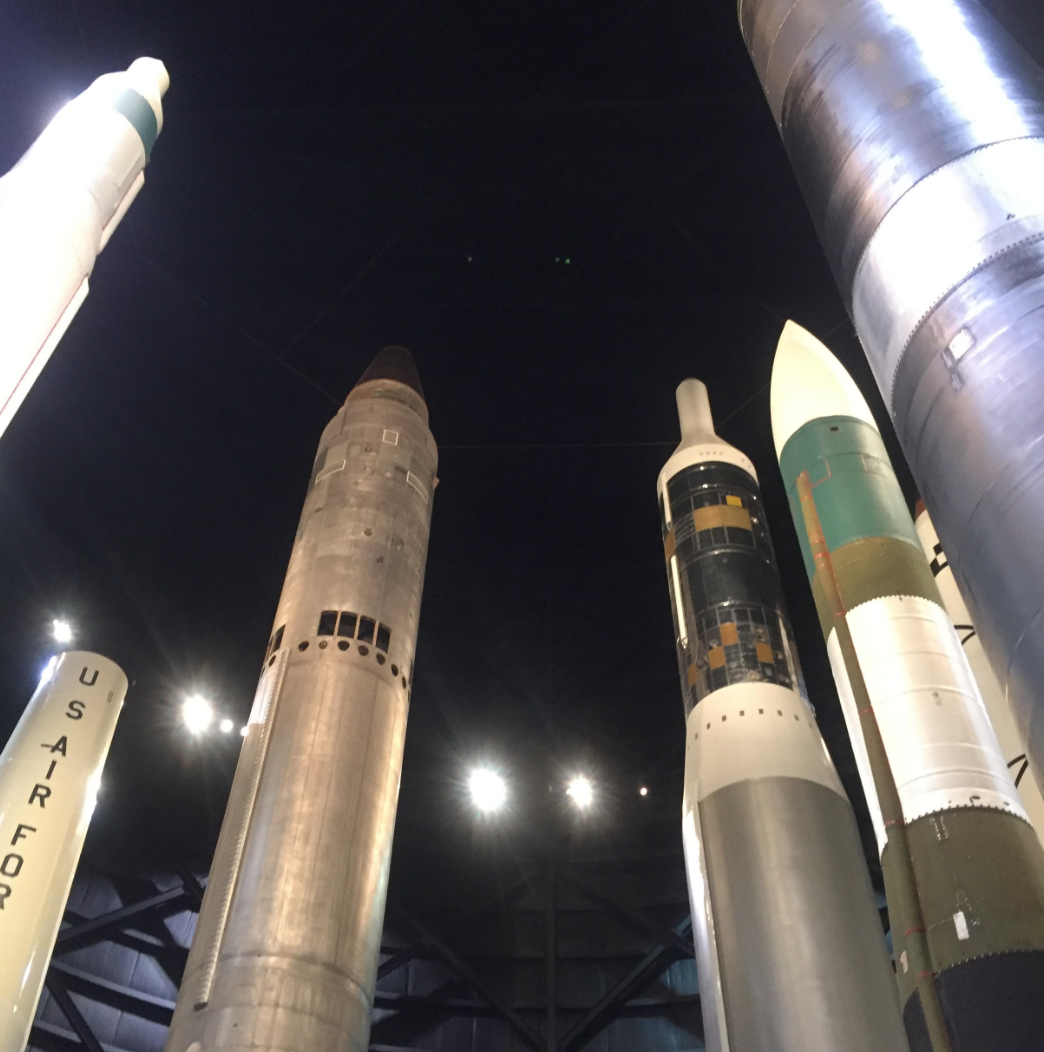 Missile Gallery — This was pretty amazing! To see a sort of real-life Missile Silo and to be standing next to the missiles felt surreal.

Space Gallery — We loved getting to walk inside a full-size representation of a NASA space shuttle payload bay and look inside the CCT-1 cockpit and mid-deck areas. We were shocked at how small the area was for the crew. I can’t fathom being holed up in such a small area for a week or so on a mission with multiple other people! 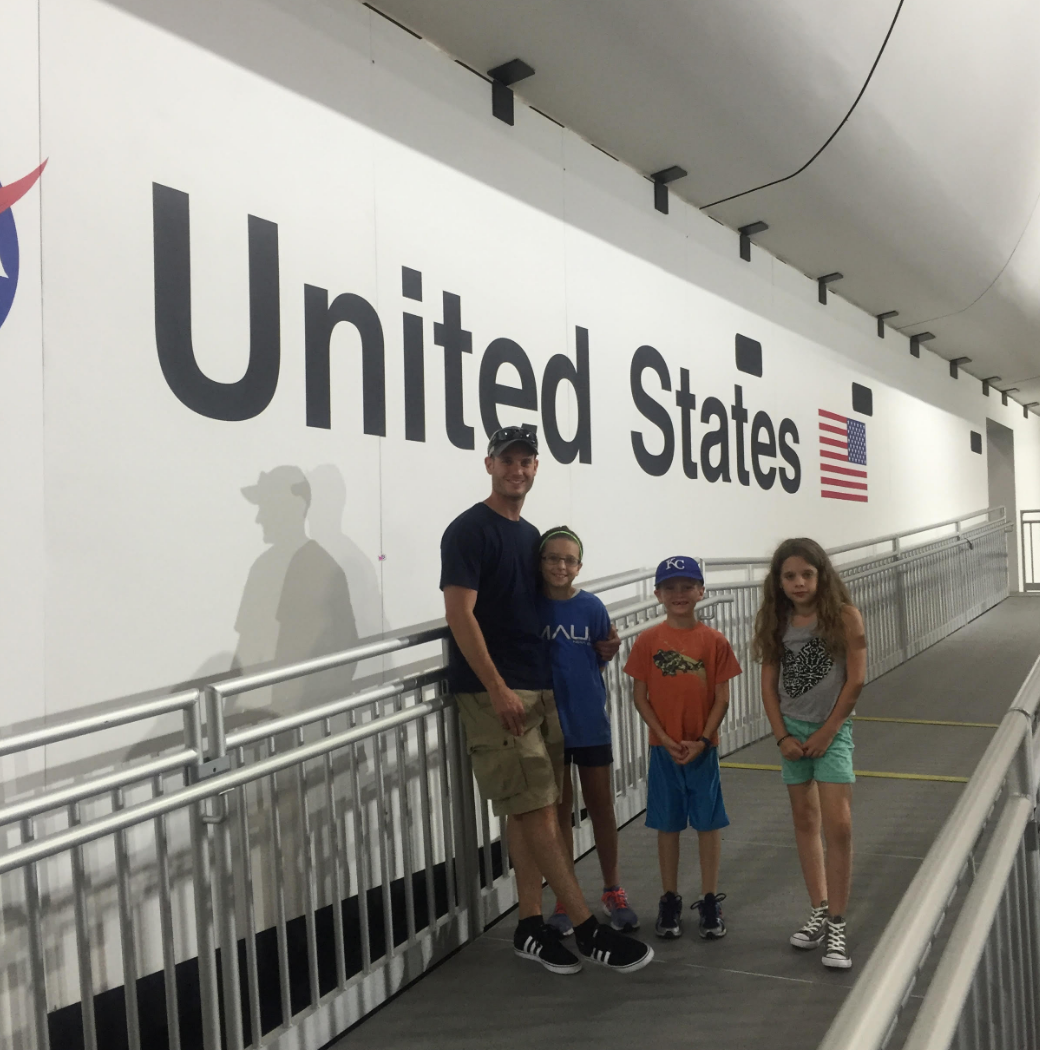 Presidential Gallery — Even though we loved the World War II gallery and the other galleries, our excitement was through the roof when we got to the Presidential Gallery. Why? Because we got to walk inside and tour the presidential planes used by Presidents Roosevelt, Truman, Eisenhower as well as the Boeing VC-137C 26000, which was used by eight presidents — Kennedy, Johnson, Nixon, Ford, Carter, Reagan, George H.W. Bush, and Clinton!

It was kind of overwhelming to be in the plane that carried John F. Kennedy’s body after he was shot and to think of how we were walking in planes that had carried such high-ranking people who have impacted our country so profoundly. We were pretty much all in awe — even though it was the end of the day and we’d done a lot of walking! 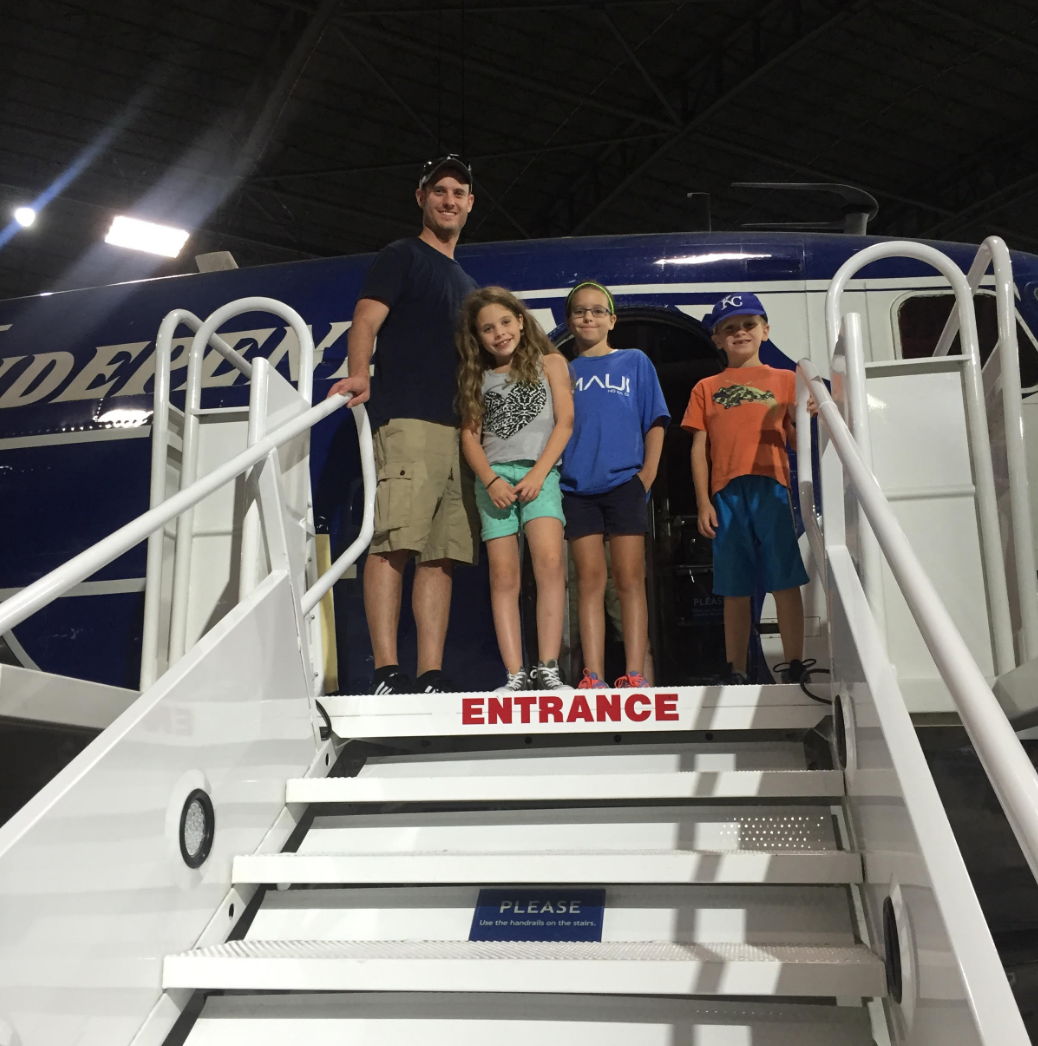 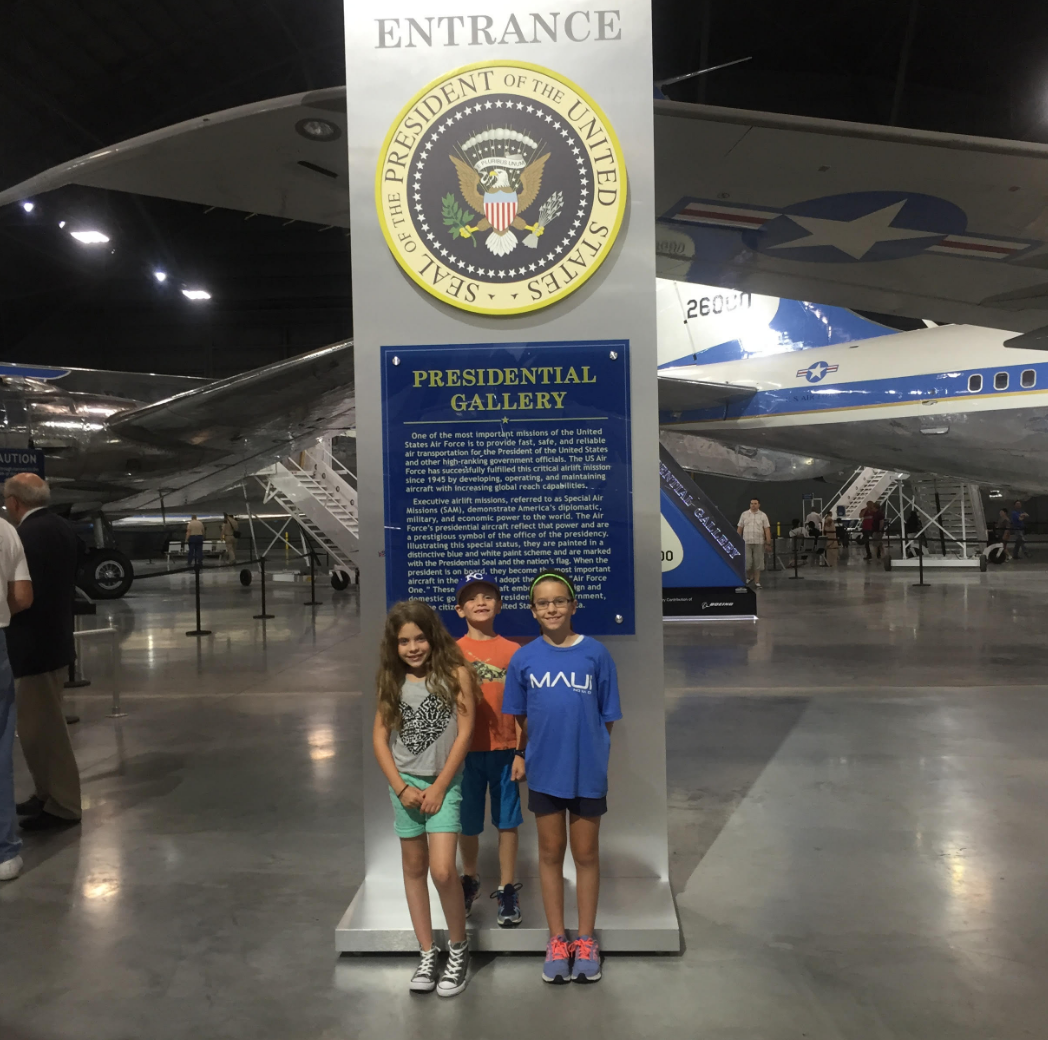 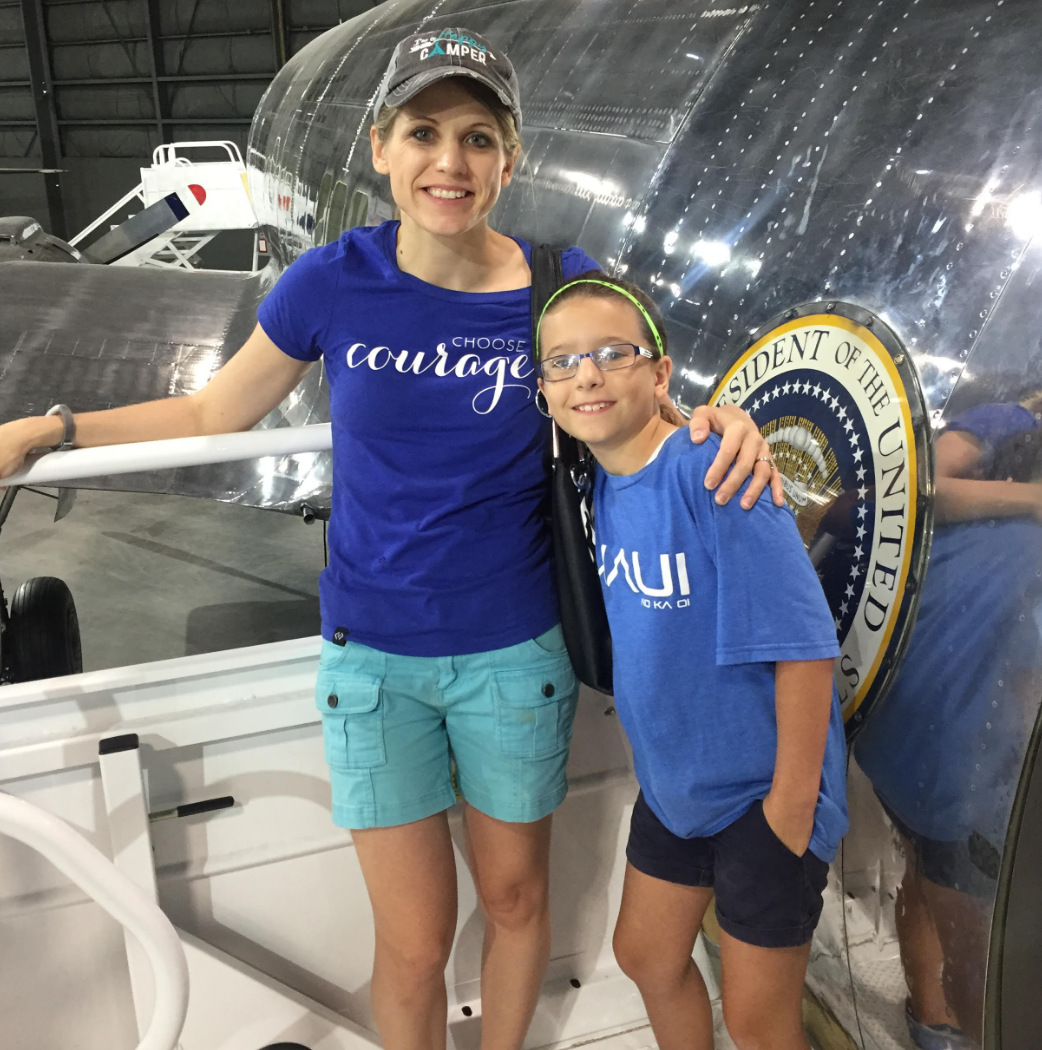 While I think there’s so much you can learn just by going through the museum yourself, you can learn even more with their numerous tour options. And did I mention all of these are FREE?

Daily Guided Tours — The museum offers free guided tours of the museum daily. These last approximately one hour and 30 minutes. Advance registration is not necessary. Find out more here.

Behind-the-Scenes Tours — Behind the Scenes Tours are regularly scheduled, free guided tours of the museum’s restoration area. Participants are shuttled to the restoration hangars, located about one mile from the main museum complex. Tours are offered every Friday (some exceptions) at 12:15 p.m. Advance registration is required. Find out more here. 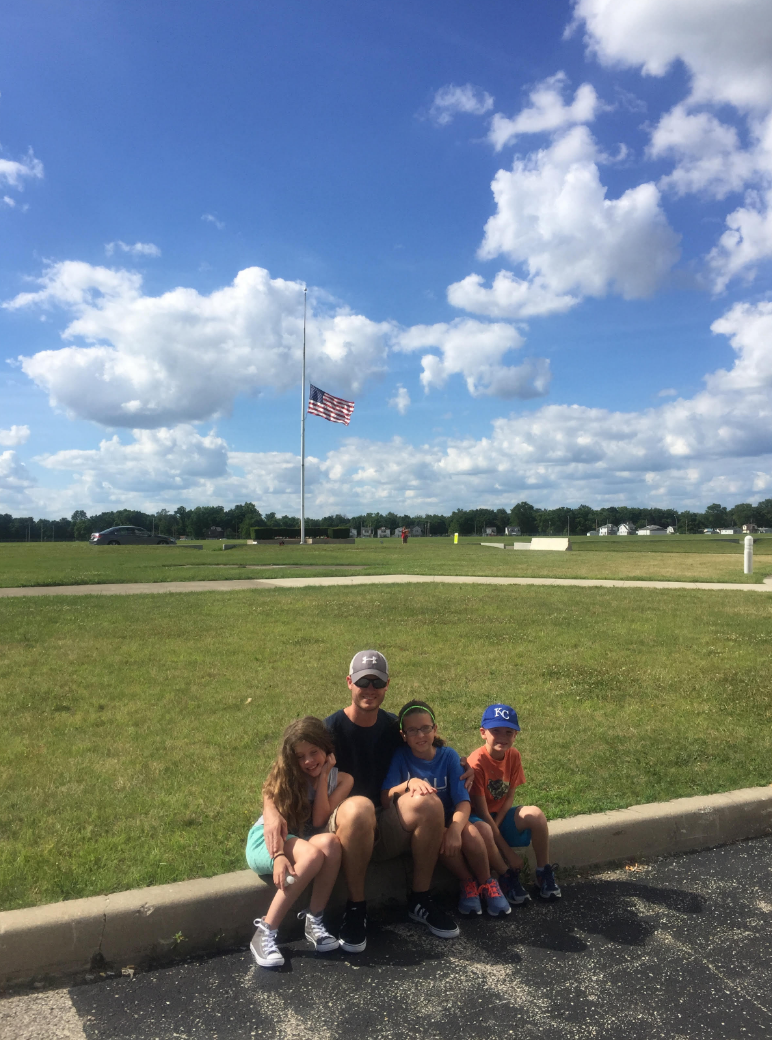 Tips For Making the Most of Your Museum Visit

Pack a picnic lunch — You cannot bring outside food or drink inside the museum. You also cannot eat or drink except in designated areas in the museum — such as in the restaurant areas. From what we saw, they were quite strict with these rules.

However, you could definitely pack snacks, drinks, and a picnic lunch and go out to your car to eat it. I didn’t see any picnic tables, but there was a lot of space outside where you could spread out a blanket and have a picnic.

Note: The food at the restaurants was quite expensive from what I saw (you can see some of the prices here). I kind of felt like they had it priced like they did to help cover some of the museum costs. 🙂

Bring a stroller — If you have younger kids, bring a stroller. Even if your youngest is 5 or 6, they will likely tire from all of the walking and it would be easier to push them around so their legs could rest for awhile. Almost the entire museum is stroller-friendly.

Be prepared for lots of walking — Like I alluded to, it’s a HUGE museum with four separate buildings. Wear comfortable shoes and plan to do lots and lots of walking. There are some places where you can sit down and watch various movies about an exhibit, but there weren’t a lot of comfortable places to sit and rest your legs that I saw.

If you needed to take a break, though, you could go sit in the cafe area. You wouldn’t need to purchase anything to sit there and when we were there, it was pretty deserted (however, we were also in there around 3:30 p.m. — so we probably missed the lunch crowds).

Bring your camera — There are no restrictions on taking pictures and, believe me, you will want to take lots of pictures. Or at least I sure did! 🙂

Spend some time researching the museum’s website — I wish I had done this! The museum’s website is very comprehensive and detailed and will give you lots of helpful advice to make the most of your visit. I’d also recommend deciding ahead of time which areas you want to spend the most time at. You can’t do it all, so going into it knowing your priority areas will help make sure you actually make time to hit those!

I think it would take a good 6-8 hours to go through all of the exhibits at a non-rushed pace. This wouldn’t allow us to stop at read all the signs, by any means, but I think 6-8 hours would be enough time to make it through everything and spend some extra time in those areas where your family is most interested.

The museum is open 9 a.m. to 5 p.m. seven days a week. The museum is closed on Thanksgiving, Christmas and New Year’s Day. 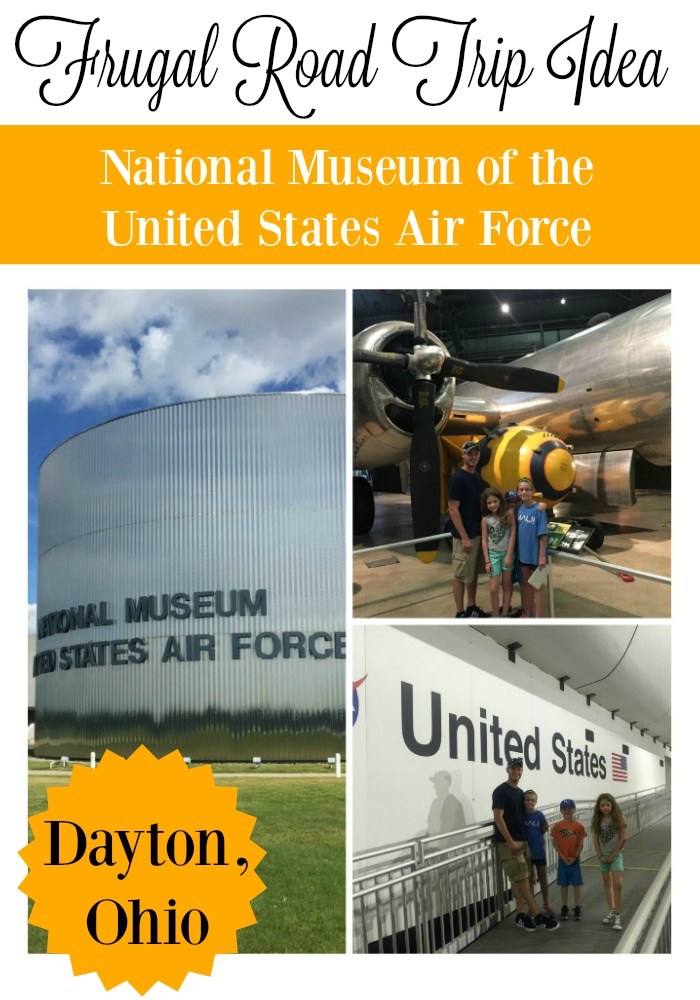 Have any Frugal Road Trip Ideas for our family to explore next?

I’d love to hear! I’m hoping to share more detailed review posts like this of attractions and museums that I think you all might be interested in so leave a comment or shoot me an email if you have a suggestion for other great frugal attractions or museums you think our family should visit!