Frugal Failure: So much for my beautiful Cinnamon Sugar Bread! 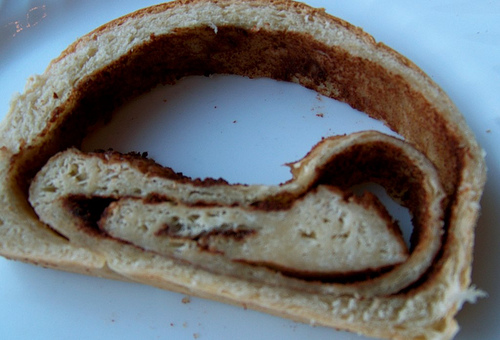 You know how I promised you the Cinnamon Raisin Bread and Cinnamon Sugar Bread recipe this week?

Well, um, I thought I had tweaked the recipe and worked out the perfect combination of ingredients. However, when I went to make a final batch to make sure it worked correctly, I made a serious mistake: I forgot to put the paddles in the bread machine!

So I ran the whole dough cycle without any paddles. Which, ahem, is a rather pointless exercise.

When I finally discovered my mistake, it was too late in the day to run another dough cycle and bake the bread, so I just let the ingredients sit until the morning.

In the morning, I tried to run the dough cycle again, this time with the paddles in. Only (you’re not going to believe this!), one of the paddles wasn’t in all the way, so only half the dough got mixed up. 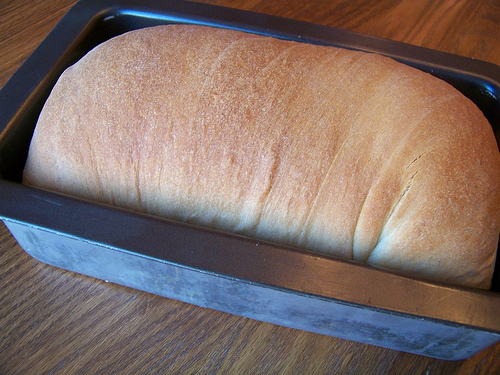 Determined not to waste the ingredients, I ran the dough through yet another short cycle. It rose and rolled out normally and baked into a beautiful loaf.

But the looks of this beautiful loaf were very deceiving, because when I cut into it, I found a practically hollow loaf. 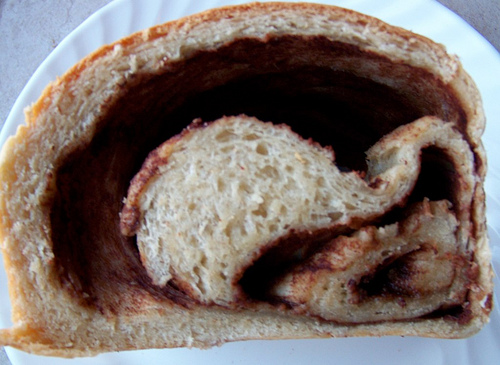 The girls and I ate the bread, regardless of the mishaps, and it was still quite good. But I thought the filling needed a little more tweaking and, obviously, I need to get my brain cells connected better so I can make dough correctly.

I promise I’ll experiment some more over the next few days and hopefully be able to present a delicious and near-perfect Cinnamon Raisin and Cinnamon Sugar Bread recipe next week. Hopefully!

Note: Apparently, I’m not the only one with bread issues this week, since Tammy also had a similar mishap. I guess I’m in good company. 🙂