So, today’s Freezer Cooking in an Hour felt like a royal flop. However, nothing actually ended up in the trash, so I guess it wasn’t a complete flop.

I had high hopes for these Coconut Flour Waffles. I should have realized that they would have tasted rather egg-y though, since they do happen to have six eggs and only 1/4 cup coconut flour. I guess I failed to notice that until after I was making the recipe. Oops. 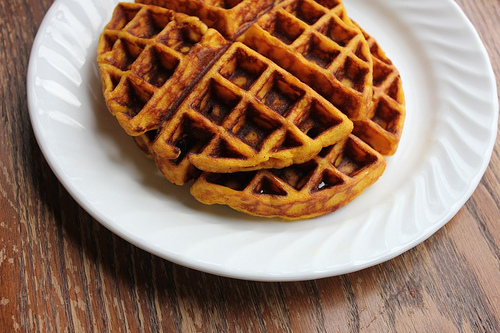 At any rate, the batter cooked on the waffle iron okay, but they just didn’t taste all that great in my opinion. The children said they were fine, but they didn’t gobble them down like they usually do fresh-off-the-waffle-iron waffles.

I think we’ll stick to this Dairy-Free, Gluten-Free Waffle recipe.

And the Flourless Fudge Cookies looked so good, but I messed up the recipe by using whole eggs instead of egg whites. Don’t ask what I was thinking as I apparently wasn’t! I was chatting with my sister while I was making them and maybe that’s why I failed to think about the ramifications of that recipe tweak.

The batter was really soupy, so I decided to try adding in some gluten-free oats and chocolate chips. It didn’t seem to make that much of a difference as the pan of cookies clearly shows. 🙂 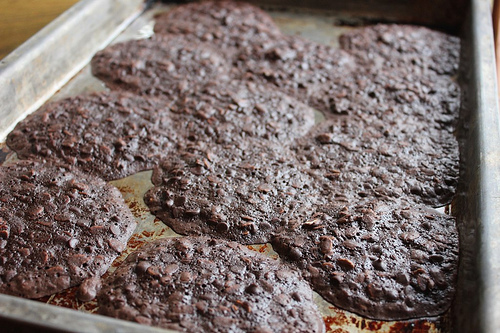 My brother was over and he walked in the kitchen saying, “It smells so good in here, what are you making?” After seeing the pan of “cookies” (if you can call them that), he wasn’t quite as excited about the good smells. Instead he asked, “What is THAT?!”

Kathrynne, sweet girl that she is, tried to console me by saying, “Mom, I think they look good.”

Despite how flat, run together, and crumbly the cookies were, they actually tasted great. And I think the recipe would be really good if I used egg whites instead of whole eggs.

Oh when will I ever learn to stop making so many substitutions?!? 🙂

Have you had any recipe successes or failures recently?