Well, I sort of cheated for yesterday’s Freezer Cooking In An Hour session. First off, I baked the chicken during dinner the night before to save me time and then I gave myself two hours to accomplish my list instead of one. But I still got a lot done in a shorter amount of time — and that’s truly the point of why I challenge myself to do Freezer Cooking In An Hour each week.

4:00 — I set the timer, tied on my apron, pulled my hair back and got to work. I put the dough in the bread machine for Failproof Bread Machine French Bread. I started the ground beef, mixed the oats and yogurt for the Oatmeal Raisin muffins and started mixing up the Honey Cornbread recipe.

4:20 — While the ground beef was cooking, I chopped the onion to add to it and then went back to finishing the Honey Cornbread. I assembled the Corn Dog muffins and stuck them in the oven and then started the pasta boiling. 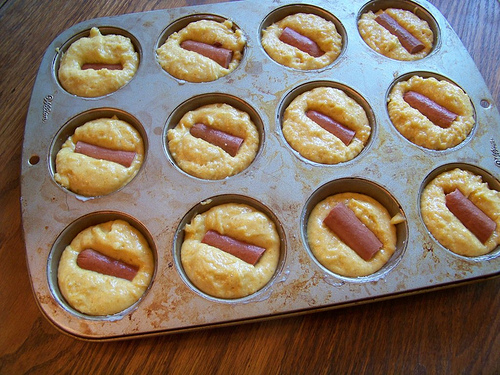 4:45 — In the middle of mixing up the Oatmeal Raisin muffins, I heard the familiar “mo-o-o-o-o-ma” coming from Silas’ room. I got him up and made popcorn for a snack for all the children and then sent them downstairs to play.

5:10 — The pasta was done, so I assembled the Italian Pasta Bakes and then took a break to clean up the kitchen. I really wanted to make the Banana Chocolate Chip Muffins and the Healthy Chocolate Peanut Butter Fudge, but I was running out of time and energy. So I opted to just finish up what I already had started and save those to make later in the week.

5:25 — I pulled the oatmeal muffins out of the oven — yum! — and then started chopping up the chicken while the water was boiling for the stuffing. I couldn’t believe the children were still downstairs playing quietly! It’s a rare occurrence that all three of them play together for longer than 20 minutes without someone getting hurt or a fighting ensuing (we’re working on it, but it seems to be a slow learning process!).

5:35 — The chicken was finally chopped, so I put together the Chicken Stuffing Casseroles together. I then went to pull the French Bread dough out of the bread machine. So much for it being failproof. The dough was really stiff — way too stiff for French Bread. I tried to make it work, but I finally gave up. I think I better find a different French Bread recipe! (Anyone have a more proven failproof recipe to share? Or a suggestion of why mine didn’t turn out?) 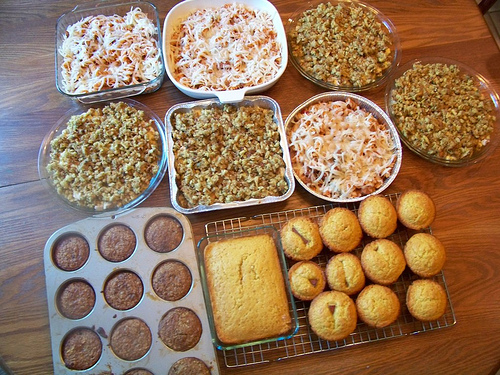 12 Corn Dog Muffins (I used my Honey Cornbread Recipe and Beef Hotdogs. These are very yummy — for kids and adults alike!)

I small pan of Honey Cornbread