How’s the Freezer Cooking Day going at your house? My sister Gretchen, came to help me and we began our cooking around 9:15 a.m.

(After I made out my plan, I started panicking a little because I wasn’t sure how I could pull off making 25 meals in five hours with three little children underfoot. So I “bribed” my sister to come by telling her I’d send some of the food home with her so she wouldn’t have to cook as much in March! I’m sure she would have come without the bribe–because she’s nice like that–but I’m sure the bribe didn’t hurt anything!)

I got started on the Prep Work list while Gretchen started in on making the Butterhorns since those are a little more time-intensive. 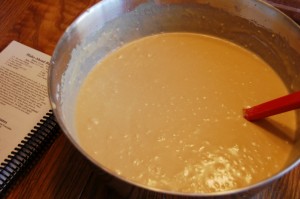 We decided to double the Butterhorn recipe, which probably wasn’t the best idea seeing as it made a massive amount of dough and was a little hard to knead and work with. But she managed to pull it off.

While the dough was rising, Gretchen finished mixing up the Blueberry Pancakes. I already had the dry ingredients mixed up for her, so she just had to add in the wet ingredients. I told her to let me know how many eggs the recipe took since we were running short on eggs and I wanted to make sure we had enough to go around. That’s when we both realized the recipe didn’t list eggs as one of the ingredients (Do you see eggs listed here? Are we going blind?) 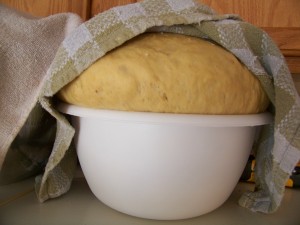 I finished up all the Prep Work and then got ready to make the Cheeseburger Meatloaf. Only there was one big problem: we realized that my two big bowls were up on top of the refrigerator with dough rising in them. So there was nothing for me to mix up the meatloaf in. Oops. I guess that I’m not really set up for this two-people-working-in-the-kitchen thing. Maybe I should look for some more big bowls the next time I’m at the thrift store?

Since I couldn’t sit around and wait for the dough to finish rising, I finally opted to mix up the meatloaf in a 9×13 pan. It worked, albeit not quite as great as a bowl would. 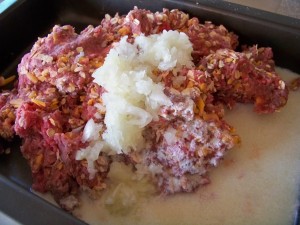 Next up: Brown-Bag Burritos and Chicken and Red Bean Burritos