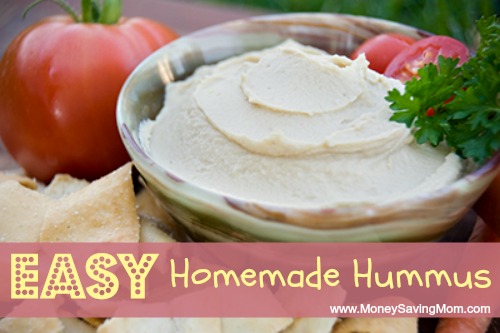 Guest post from of Chris of Simple Family Finance

Get ready. Today, you’re in for a good ol’ fashioned food fight! Don’t pretend like you don’t love those.

Three similar items are going to face off to determine who the winner is. We all know that price comparisons are vital to a frugal food budget, so the winner will be determined by value.

This time we’re going to get downright Middle Eastern with Hummus.

Though hummus originates in the Middle East, it has recently made the long journey to American kitchens, and we’re all better for it. The hippies of the 60’s and 70’s (you know who you are!), were some of the first Americans to give it a go, but hummus has gone mainstream in the last 5 to 10 years.

It’s not just for vegans and vegetarians any more. Sales are growing exponentially with no signs of slowing down.

So, what is hummus? It’s remarkably simple. Hummus is pureed chickpeas with a few different spices and flavorings. The most basic varieties include garlic, lemon juice, and maybe some tahini. That’s about it.

Chickpeas (or Garbanzo Beans) are actually the most widely consumed legume in the world. Hummus can take credit for much of this, but chickpeas are also pretty great by themselves once soaked and cooked properly. My wife and I love them in salads. They’re a great source of protein and are very low in calories.

However, there’s one big problem. As much as I love hummus, it’s awfully expensive. Have you looked at the prices at your local deli recently? It’s enough to make you drop to your knees and cry. So, what we need is a no-nonsense price comparison. We need a food fight. 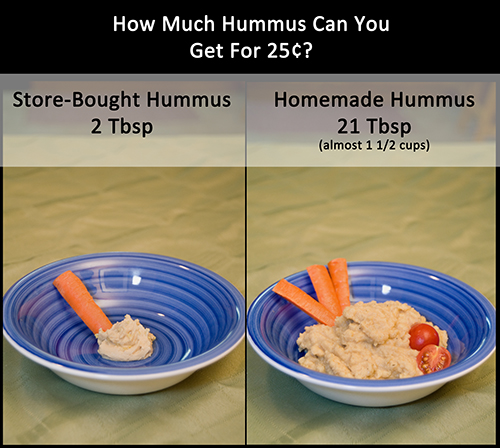 Talk about a big difference!

The first photo demonstrates Cedar’s Hummus, which was the least expensive hummus I could find at my local market ($2.50). The other brands were usually priced between $3 and $4.

The second is a super easy homemade version prepared by yours truly. You get more than 5 servings (1/4 cup per serving) for only a quarter! What other healthy snack boasts that kind of frugality?

The bottom line is this: We all know that homemade usually wins the price comparison over store-bought, no matter what the product. However, some foods barely win out and other foods simply blow away the competition. Hummus is one of the latter.

I simply can’t think of a plausible explanation why it costs so much in stores. It’s 95% pureed chickpeas. Do you know how cheap dried chickpeas are?!

The only reason I could come up with is that it’s still considered a specialty item. Even with it’s recent acceptance, hummus is still considered slightly exotic, and therefore, companies can get away with charging more for the mystery. I’m here to take the mystery out of it. It couldn’t be simpler or cheaper to make.

Here’s an easy recipe to get you started.

1. Combine all of the ingredients other than the water into a quality food processor or blender and let it do its thing.

2. Add some water 1/4 cup at a time and continue blending, scraping down the sides occasionally if needed. You can add more or less water than suggested, depending on your desired consistency.

To cook dried chickpeas, first soak them over night in cold water. Then, bring the soaked chickpeas to a boil in plenty of water and reduce the heat to a simmer for 1 1/2 hours to 2 hours until tender. Leave the lid of the pot tilted slightly to allow some of the steam to escape. If you’d rather, you can cook them in a slow cooker instead.

If you’d rather just use canned chickpeas (already cooked), just realize that you’ll probably be paying more like $0.12 to $0.15 per serving instead.

The main thing missing from my recipe, that most commercial hummus has, is Tahini. It’s an oily paste made from sesame seeds.

I don’t think it’s necessary, but if you miss it, go ahead and add it in next time. You could also add olive oil if you’d like. Try 3 Tablespoon of oil and 1/4 cup+ water instead of 1/2 cup of water if you’d like a richer flavor. Either way, it will still be much cheaper than buying your hummus already prepared.

Another delicious option…swap the onion powder for 1 teaspoon cumin and 1/2 teaspoon chili powder for a more Southwestern flavor.

Be creative when making hummus. There are hundreds of possibilities!

This article is part of a series called Photo Food Fights at Simple Family Finance. You can find this recipe and over 150 other deliciously frugal recipes in Chris’s book, Eating Well For Only $2 A Day!