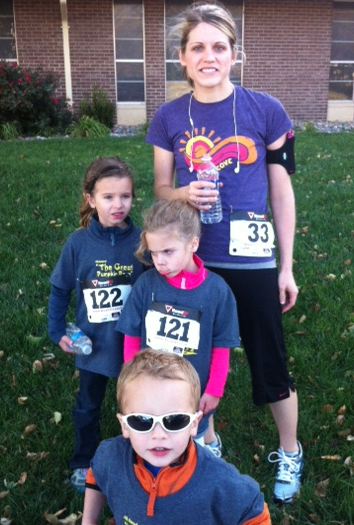 Last Saturday morning, bright and early, I got up and did something I’ve always wished I could do… I ran (and finished!) my first 5K race.

For some of you who run multiple marathons a year, that sounds like a cakewalk, something you’d do as a little warmup. For me, on the other hand, it was monumental.

I’d Convinced Myself I Wasn’t a Runner

You see, up until two years ago, I couldn’t even run a half mile without collapsing and feeling like I was going to hyperventilate. So I’d long ago convinced myself that I’m not a runner. Instead, I’d walk or bike or get on the elliptical.

However, after challenging myself to start and follow through with an entire round (all 90 days!) of P90X awhile back, I decided to just try running a mile to see if I’d really increased my endurance or gotten stronger.

To my utter disbelief, I ran a little more than a mile without stopping!

Inspired by this success, I started running on a regular basis. At first, I could barely pull off more than a mile. But I kept making myself get on the treadmill, even when it was the last thing I wanted to do.

Doing Something I Never Believed Was Possible

I started the Couch to 5K program to help keep me on track and gradually working on improving my endurance and time. Some days, it was grueling and I felt like I was going to keel over and throw up. Some days, I had to stop because I just had nothing left to give.

But I didn’t give up. And one day, after a number of months of consistently running, I got on the treadmill and ran 3.1 miles without stopping.

I’m not an emotional person by nature, but I cried the whole last quarter of a mile.

Why? Because I had done something I never believed to be possible. I had run a 5K. Granted, the 5K was on the treadmill, but it was still 3.1 miles — something I never would have thought weak, non-runner me could pull off.

Facing My Fears Head On

But I was still scared to actually run in a race. To go out there with other people and try to start and finish a 5K seemed daunting. I was afraid of failing, coming in last, or just plain not being able to pull it off under pressure. I know it sounds silly to admit it out loud, but I’m just being gut honest here.

As I’ve been learning recently, though, sometimes the best thing you can do in the face of fear is to just do it. Just step out and face head on whatever scares you most. The more you face your fears, the less daunting they seem to be.

So, I signed up for the race, I put on my running shoes, and I showed up. Still nervous about the whole thing, but determined to not cower away from something I’d set out to do — even if it was hard.

Even If I Didn’t Medal, I Came Home a Winner

It wasn’t the best race ever, and I certainly didn’t come close to having a shot at a medal, but when I ran through that finish line, I felt every bit like I’d won a gold medal. Regardless of my time, regardless of the fact that many people older than me had a much better time, I finished — and that’s what mattered.

Truthfully, once I got over my initial fears and pre-race jitters, I loved the experience. And I’m pretty sure that it will be the first of many races to come… in fact, I’m planning to set a goal to run at least one 10K race in 2013.

It just goes to show, you will never find out how far you can go, unless you just get out there and start trying.

Have you faced some of your fears and stepped out of your comfort zone recently? If so, tell us about it so we can cheer you on!