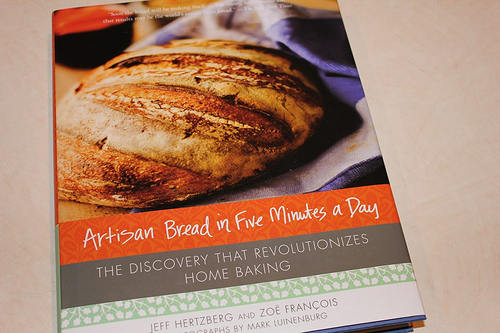 Hundreds of you have raved about Artisan Bread in Five Minutes a Day. I bought the book months ago, read it in Spring, and have since been trying out making the bread recipes. 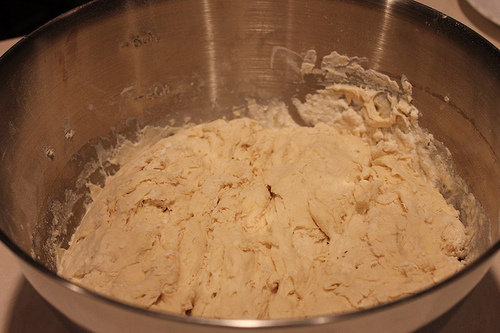 The concept is simple: you take a few minutes to mix up some ingredients. You don’t knead the bread and instead let it rest for at least a few hours and then you can refrigerate it for up to two weeks to have fresh Artisan Bread with less than five minutes’ worth of work at any given time.

Truthfully, I was confused over the directions when I read the book the first time. I read and re-read the first chapter to figure out exactly what I was supposed to do with the dough once I made it.

I finally came across Mandy’s video (above) on how to make artisan bread and it all became much more clear. {Yes, I’m a visual learner if there ever was one!}

The bread was extremely easy to make, just like you all have been telling me. However, the first batch was way, way too salty. I followed the directions carefully and was quite disappointed in how it turned out. {Edit: I did use table salt instead of kosher salt the first time around and I’m guessing that could have been much of the issue.} 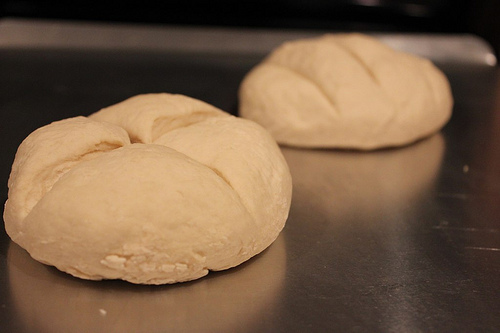 It looked beautiful, but it tasted gross. So gross, in fact, that I threw out the baked bread and the rest of the dough. And I was rather discouraged about the whole thing. This bread was supposed to revolutionize my baking. Instead, I threw it out. Um, that’s not exactly what I was envisioning with this recipe.

But then I read online where someone suggested cutting the salt in half. I did that and it was a lot better. 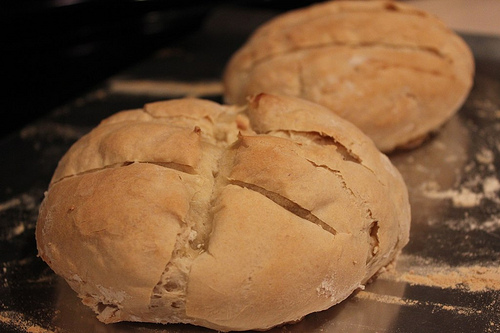 (Note: I didn’t use a baking stone (I don’t have one) or the steam method on these loaves. I think that’s why they look undercooked, even though I baked them the full amount of time. I’m going to keep experimenting and am hoping I can land on the perfect amazing bread you all keep talking about!)

I have yet to dub Artisan Bread in Five Minutes a Day as the next best thing to sliced bread and I won’t be making it exclusively as I have a number of other bread recipes I really love, but I think the concept is fascinating, the bread is undeniably easy to make, and it’s definitely a recipe I’ll be adding to our regular bread recipes line-up.

Have you tried the Artisan Bread in Five Minutes a Day Recipe? If so, I’d love to hear what you thought of it! (And feel feel to chime in on suggestions for me on what I’m doing wrong and how I can improve! I really want to make the beautiful loaves that the book pictures!)