I’ve now been using Dollar Shave Club for a couple of years and below you’ll see my updated (and completely honest) thoughts! I think it’s a really great way to save on razors — especially if you don’t like to mess with in-store couponing. 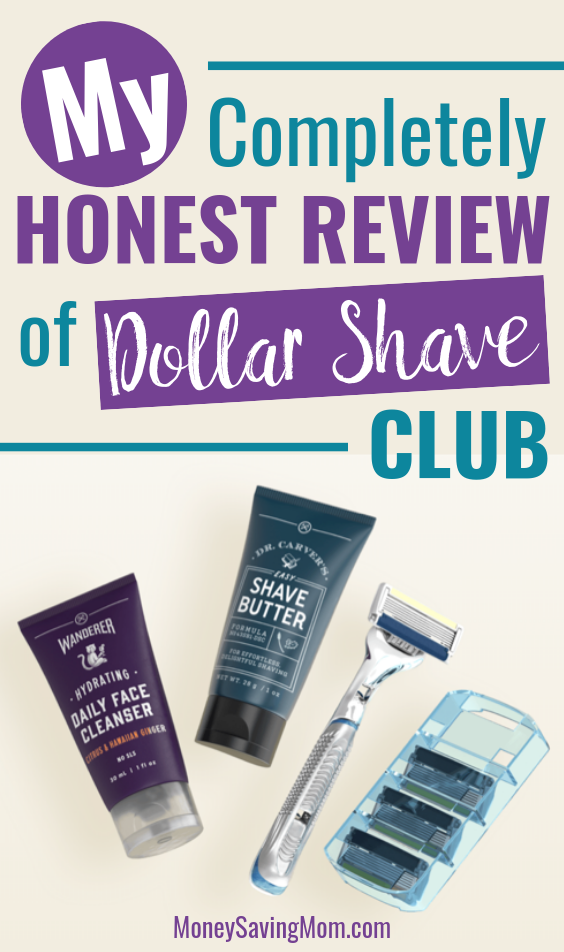 A couple years ago, I posted a funny post about how I had been using a disposable razor head without a handle to shave that week because I had left my razor in Dallas on a speaking trip and was too cheap to go buy a new razor when I could make do with just using a razor head until a new razor could come in from Amazon (purchased with a free gift card from Swagbucks).

So many of you commented on that post and gave hilarious suggestions and funny money-saving confessions. (You can read some of those funny comments here.) Plus, some of you left some great tips and tricks for saving on razors!

One of the suggestions that people gave over and over again was for me to sign up for Dollar Shave Club. I think almost every one of us has heard of this program. It’s a monthly subscription box service that sends you razor blades every month so you never run out of razors. 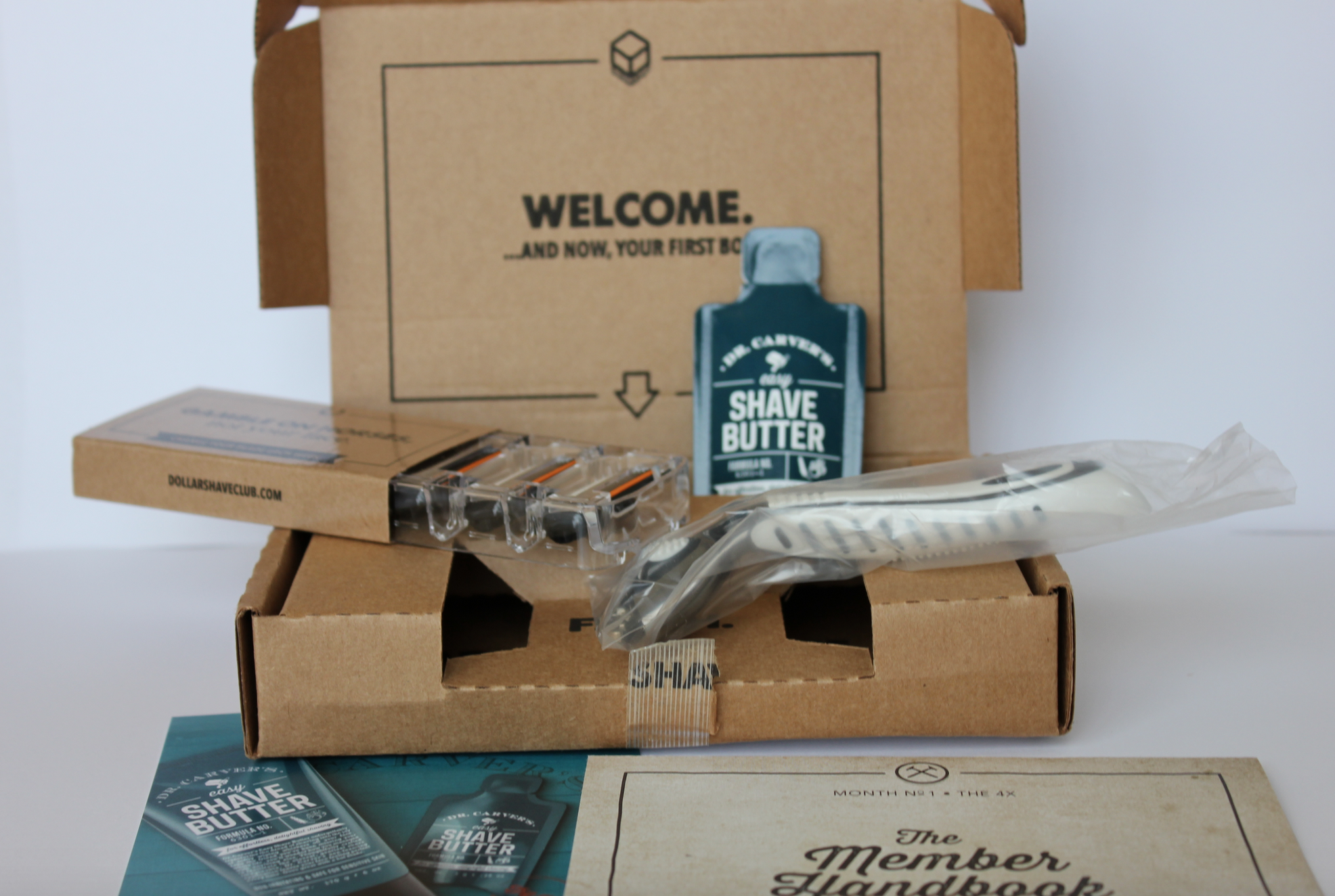 Why I was skeptical about Dollar Shave Club

I’ve been skeptical of the whole idea. I’m not really sure why? Maybe it’s because their ads are a bit quirky? Or maybe it’s because I’m spoiled from being able to get razors for FREE for so many years — either with coupons and rebates or through Amazon with gift cards I earned from Swagbucks. I didn’t see the point in paying for a program like this!

You see, for the first few years of our marriage, I always had a surplus of razors I had gotten free by pairing coupons with the drugstore rebate programs. And when the drugstore deals became a lot less abundant, I realized we were spoiled from using great disposable razors! The thought of going back to cheap ones wasn’t really appealing.

The deals at drugstores aren’t as prevalent now, but you can still occasionally find a good deal on razors by pairing a coupon with a sale and/or drugstore rebate. However, just as the deals on razors started waning, I discovered Swagbucks and, ever since then, have used the free gift cards I’ve earned there to cover the costs of razors. I usually just buy high-quality razors that are still priced well. (If I get lucky, I’ll find an e-coupon I can clip to save more!)

So I’ve never looked into Dollar Shave Club other than to think, “Wow! I guess people will pay for anything as a subscription box service! But really… who would PAY for a monthly subscription to get razors in the mail??!”

Summer said: “Have you considered Dollar Shave Club? I was so skeptical at first, but my husband and I both LOVE it. (We get the middle of the road razors and the cartridges are $6 a month for 4.) They will auto mail them out, but you can change it either from monthly to bi-monthly at any time! AND they e-mail you a few days before your shipment to remind you to make changes. (Speaking from experience!) My mom even got hooked on the program, too.”

And Lindsay agreed: “We love Dollar Shave Club!! My husband and I use the same razor blades and each have our own handle and pack of blades. We share the refills and only order once every other month, so $36 a year for both of us. Frugal and I love how I never ‘run out’ of refills.”

Really?!?! Apparently I’m one of the few people who thought getting razors in the mail was just a weird idea. 😉

Why I decided to try Dollar Shave Club

In the name of wanting to investigate this out to see if it was really a good deal and also wanting to follow my own mantra of “don’t knock it until you’ve tried it”, I signed up for Dollar Shave Club. Since it was only $6 per month, I figured that if I didn’t like it, I could cancel after a month or two and not really be out much out of pocket for my experiment!

Plus, since so many of you were looking for Dollar Shave Club reviews, I had promised you all an honest review — and I figured that it was worth spending a little money out of pocket to try this for 3 months and report back to you all with my honest thoughts. 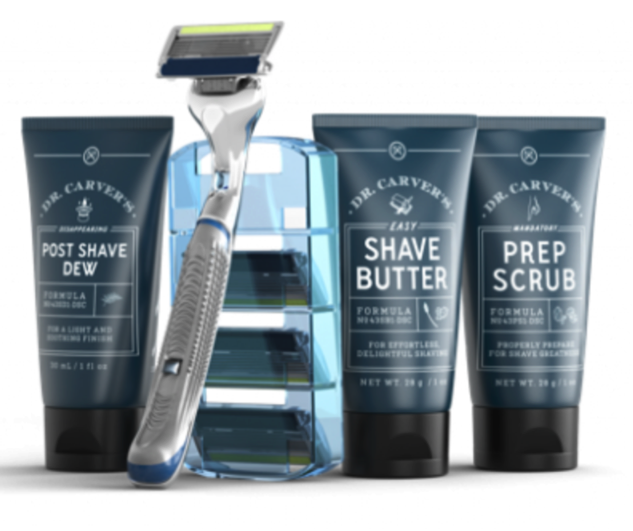 When I first signed up, this $5 Starter Set offer wasn’t available, so I chose the $6 box. If you’re interested, you can go here to watch my unboxing video where I talked more about my first box. 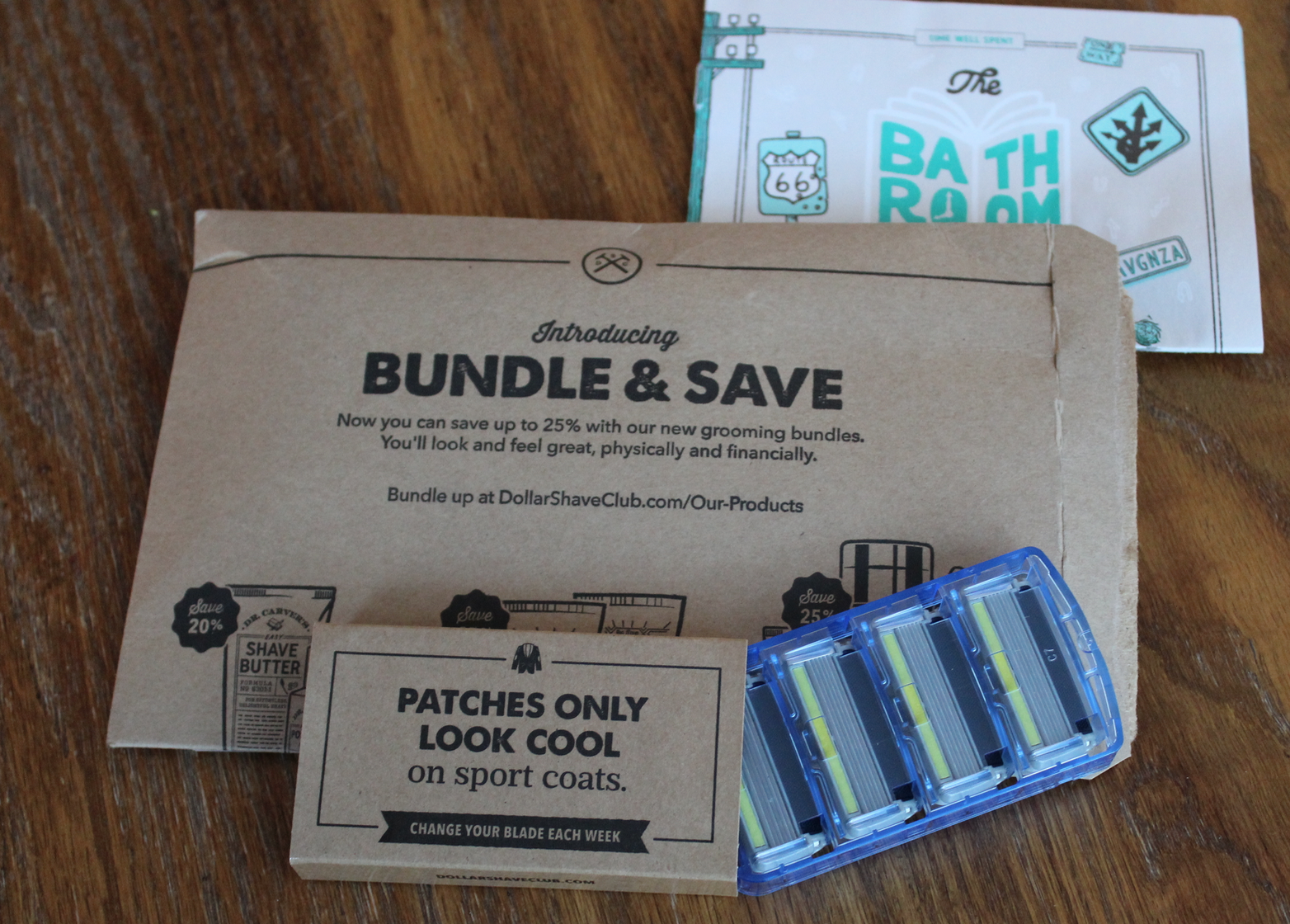 What Comes in a Regular Monthly Box 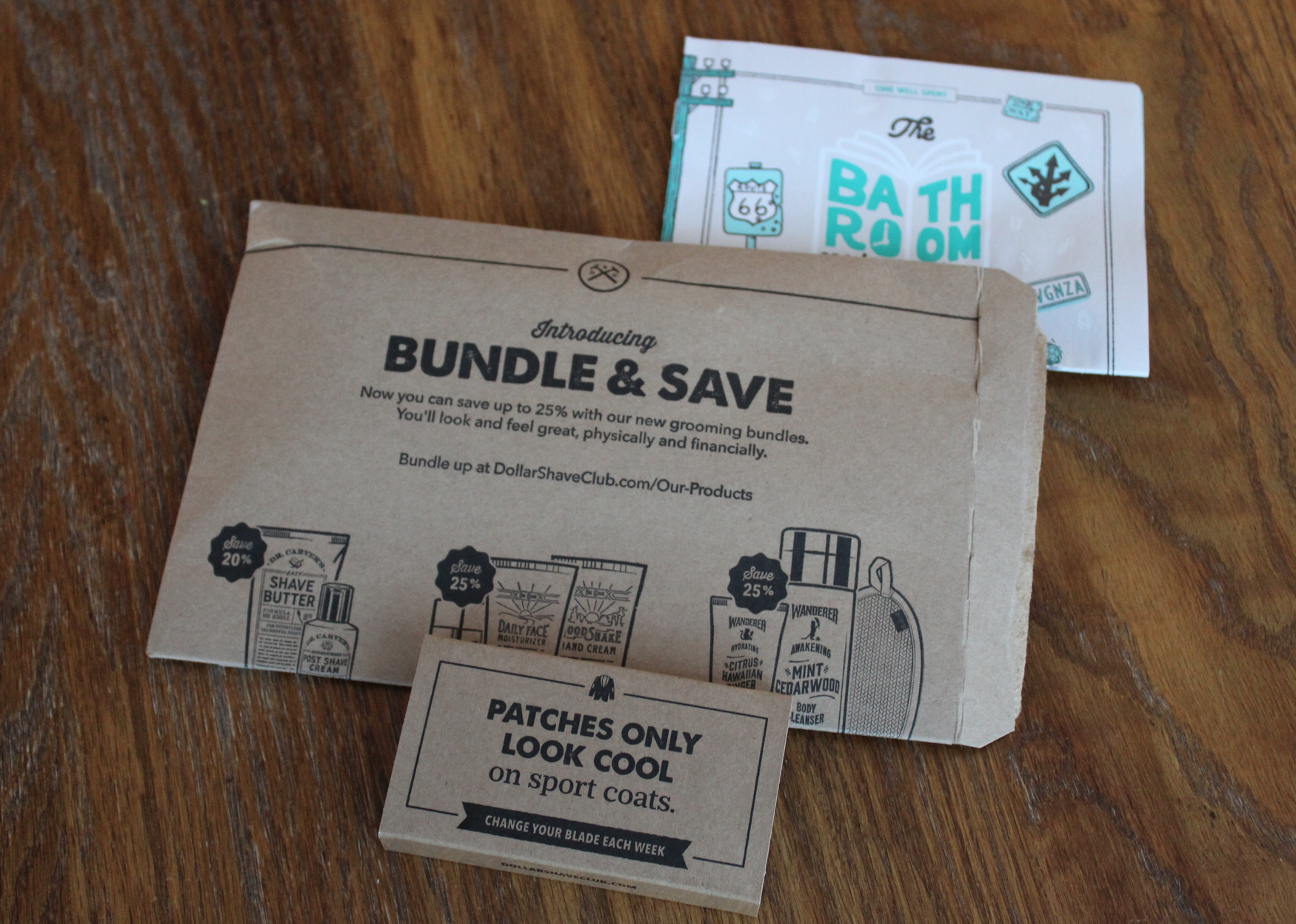 I have definitely surprised myself with liking Dollar Shave Club — and I’ve found myself agreeing with all the positive Dollar Shave Club reviews! The razors have held up well for me and they give a clean shave. Plus, I think they work just as well as razors that cost more than $6 for a razor + 4 cartridges.

Because I was so impressed with my experience, I decided to upgrade to the $9 per month program to see what I thought of the more expensive razor. I definitely like it better than the $6/month razors. However, I don’t think that you need to upgrade to the $9 per month subscription — unless you just really, really want to. The $6/month razor works plenty well.

One thing I’ve found is that the blades don’t hold up as long as name-brand blades do. As you know, I shave every single day. Because I’m weird like that! 😉 And I typically would only need to replace a cartridge every 3 1/2 weeks or so.

I find myself wanting to replace my cartridge at the 2 1/2 week mark with the Dollar Shave Club razors. But here’s the thing! Since I’m the only one using Dollar Shave Club in my family, I never go through all four cartridges each month! I switched to every other month shipments and it makes it half the price I was paying!

I’ve now been using Dollar Shave Club for a couple of years and still love it!

One thing I did want to note is that Kris shared this link with me and it says most of the razors from Dollar Shave Club are from Dorco and encourages people to order directly from Dorco — which I think is a great suggestion! It’s a little cheaper than Dollar Shave Club.

However, when ordering from Dorco, you have to remember to go and order blades. I think one of the major selling points of Dollar Shave Club is that you never have to remember to order razors. They just show up at your door at a lower price than you’d usually pay at the store.

Be sure to check out my post on 7 Secrets to Save Up to $100 Per Year on Razors! (And if you’re interested in other subscription services, you can also get a free Harry’s Shaving Bundle right now!)