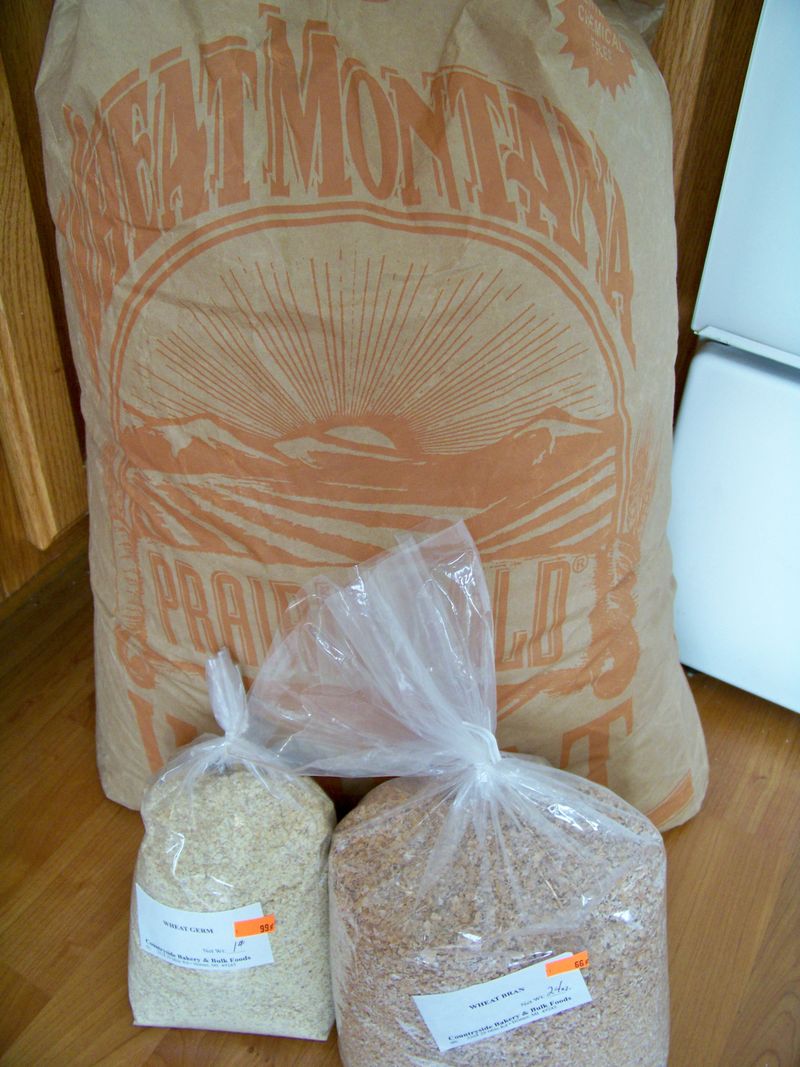 I always give myself some slack in the healthful eating department at the end of my pregnancies and after a baby is born. I know some of you can pull off six-course, from-scratch breakfasts, lunches, and dinners when you have a newborn or are 10 months pregnant, but I'm just not that ambitious.

So for the past few months, we've stuck to pretty simple meals and had more convenience foods than usual. We've haven't gone over-budget and we've not been living on total junk food by any means, but there's been a lot more white flour, sugar, and processed foods consumed in our home than normal.

Now that life has settled down a bit more and we're more adjusted to
homeschooling and having three little ones, we're working on getting back
to more healthful eating around here. We're slowly using up the extra processed foods we've accumulated and going back to cooking and baking from scratch.

One of the things I'm especially ready to add back in again is using freshly-ground whole wheat flour. However, my dilemma has been how to afford buying wheat kernels.

When we were living in Kansas City, I was purchasing wheat kernels for around $0.69 per pound at Whole Foods. Now that we've moved and no longer have a Whole Foods store nearby, though, I've been on a search for a new and inexpensive source of wheat kernels. The health food stores here allow you to purchase small quantities of wheat kernels, but they are over $1.50 per pound–which adds up really quickly when you bake as much as I do!

I found that buying wheat kernels in bulk was going to save me a large amount of money but my only problem was that buying in bulk meant I'd also have to pay a larger amount of money upfront. I thought about just using some extra non-grocery money to buy a big bag of wheat kernels, but then I decided to challenge myself to see if I could set aside a little bit from our $40 per week grocery budget and, over time, save up enough to be able to afford this bulk purchase.

By staying under-budget and mostly skipping shopping one week, I was surprised to find I had enough leftover after only one month of saving to purchase a 50-pound bag of wheat kernels last week!

I was planning to make a trip to a nearby town which has a bulk foods store to pick these up, but my older sister lives near an Amish Bulk Foods Store which has incredible
prices so she offered to buy some for me and bring it with her
when she came down for our little sister's wedding last week.

In addition to the wheat kernels, she also picked up a big bag of wheat germ and wheat bran for me–two items which were much less expensive at the Amish Bulk Foods Store than they are at the grocery stores here.

Altogether, the total for all of those items was only $30! I'm guessing the wheat kernels will last me close to a year and the wheat bran and wheat germ should last me at least a few months.

I was so excited to be able to find a way to creatively afford a bulk purchase like this without going over our $40/week grocery budget. And now the wheels are turning in my brain and I'm contemplating saving up for some other bulk purchases.

Since I'm new to buying in bulk, I'd love to have input from those of you who are more experienced at this. What items do you routinely find are better deals to purchase in bulk? Are there any websites or companies you would recommend for bulk purchases?

Edit: For those of you who have asked, I have this grain mill.
My dad bought it for me for Christmas two years ago. I usually grind up about 5 pounds of wheat kernels at a time and use what I can immediately and store the rest in the freezer until I use it. If you do this, it helps preserve the nutrients in the flour.