Home » Earning & Managing Money » Financial Freedom and Peace » Buying a Car with Cash: How We Did It (Guest Post) 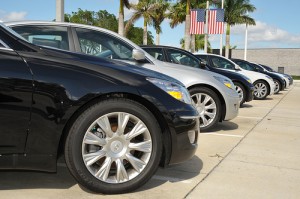 A little over two years ago we called the Dave Ramsey Show and screamed, “We’re DEBT FREE!” at the top of our lungs. It was a life changing event and a moment I will never forget. Since then, we’ve committed to live debt-free. Doing so has meant we’ve had to change our thinking about many things.

For instance, I always thought it was acceptable to have one car payment in order to have a safe and reliable vehicle. When we decided not to borrow money anymore we had to figure out a way to drive vehicles without a payment. We had purchased cars with cash in the past, but typically they were beaters that my husband drove to and from work. We wanted our next car purchase to be a late model vehicle that we could drive for at least ten years.

Is it possible to save up and pay cash for a quality vehicle in this day and age? Well, here’s how our family did it:

1) We Paid Ourselves, Instead of the Bank

When we wrote up our first debt-free budget, we included a “car payment” category. But instead of paying the bank, we paid ourselves.

We did some calculations and decided we would need to replace one of our vehicles in two to three years. Based on the vehicle we would need and the time we had, we decided to put $300 a month towards our car payment. Each month that money grew in a high interest money market account while we continued to drive around in our paid-for vehicles.

Considering the average American car payment is almost $400 a month, we were still saving money by not having a loan on our vehicle.  We figured that after three years, we would have saved over $11,000 and felt we could replace one of our vehicles with that amount if we added in the amount from the sale of our current vehicle.

Our plan seemed great, but then I ended up getting pregnant with our seventh child and our eight-passenger suburban wasn’t going to work anymore. Suddenly, there was much less time to save and more of a car to purchase.

We had about $8000 in our car fund at the time and realized we needed about $15,000 for a van. So we decided that for a short period of time we would stop funding other savings accounts and aggressively work towards saving for a van.

We were planning on selling one of our vehicles anyway, so we estimated the selling price, subtracted that amount and the $8,000 from the $15,000 and realized we needed to save about $5,000 in eight months. That amount came to about $625 a month.

While that seems like a lot of money, it was really only $325 a month because we were already saving $300 a month in our car fund. We stopped saving in other areas in order to meet our vehicle savings goal.

3) We Did Extensive Research Before Buying

During the time we were saving for a vehicle, I spent about fifteen minutes a week checking the Auto Trader, Craig’s List, Ebay, classifieds, and car dealerships websites looking for vans. I checked safety records, resale value, and owner reviews. I wanted to know what was available and the average prices.

After several months of research, I’d learned that white vans were the cheapest, sliding side doors were hard to come by, and Fords were usually less expensive than Chevys.

When we reached our savings goal, I actively began searching websites for a van that met our criteria. After four weeks of searching, I found a van that had all of our needs and preferences and it was still under warranty.

We purchased our van almost one year ago. While it was hard to part with so much money at the dealership, I don’t ever stress about not being able to make a car payment. Paid-for vehicles are fun to drive!

Toni is an author, homeschooling mother of seven children, and military spouse. Her blog, The Happy Housewife, inspires and educates on frugality, budgeting and how to thrive on one income in a two-income world.