The beans and rice are cooled and divided into bags, the pancake mix is made to have on hand for later, the two packages of chicken breasts are boiled and diced and frozen, and the double batch of whole wheat pancakes is finished and in the freezer. And whew! I'm wiped! I poured myself a glass of orange juice and made
myself a fruit salad and I'm putting my feet up until Kaitlynn's nap time is over.

Here's the end result of all of our baking/cooking/kitchen work: 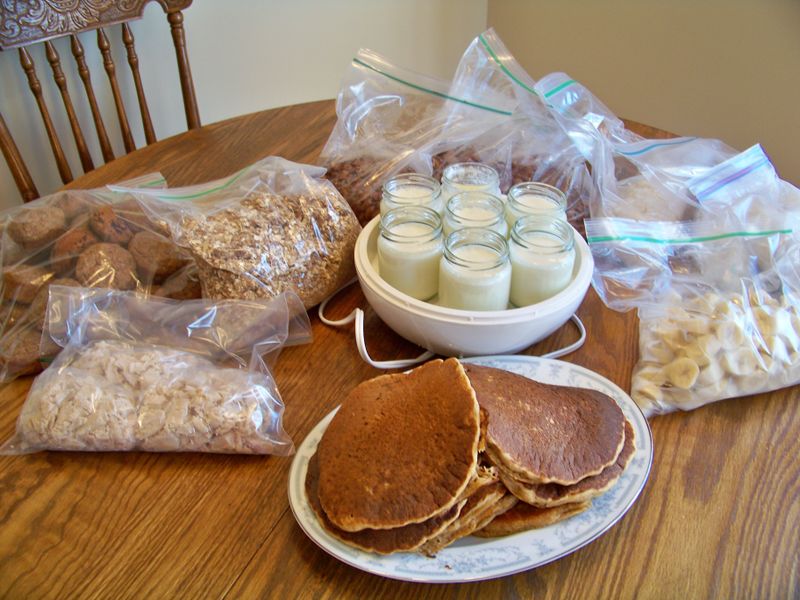 It really doesn't look like all that much, but having the makings of a number of breakfasts, lunches, snacks, and dinners already on hand and in the freezer is so helpful. If you've never tried baking ahead or cooking up meat and freezing it, I'd highly encourage you to test it out. You might find, like me, that it's a huge time-saver, money-saver, and life-saver.

There were a number of questions left in the comments section of the Baking Day posts, many which were answered by other commentors. However, I wanted to specially answer two of them since they were directed at me:

Oooo, I hope you post about the
pot of beans. It sounds silly, but I haven't a clue how to soak and
cook beans, and then how to incorporate them into yummy recipes. I'd
sure love to learn, because it sounds a LOT cheaper (and more
healthful) to not use canned beans for everything.-Katy

To be honest, it's not hard so don't be intimidated! I just take a bag of beans, dump it in a big pot, run water over it and swish it around, then drain the water. I refill the pot with enough water to cover the beans and put them on the stove to boil. 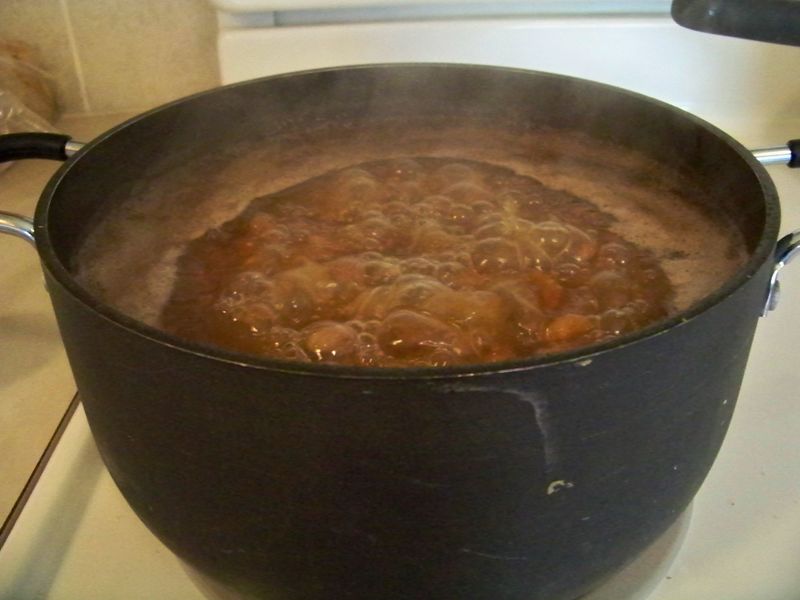 Once they boil, I turn the stove down to medium heat or so–enough to keep them going at a soft boil. As the water evaporates, I add more. Every 30 minutes or so, I check them to see if they're doing yet and continue to add water as needed. I just keep boiling them until they are cooked and then let them cool and fill bags with them. If you like, you can add a few teaspoons salt to them while they are boiling.

I use these in Mexican recipes, in soups, when we have beans and rice and cheese for lunch, or in some of our other favorite bean recipes.

I really do try to involve my kids in kitchen stuff,
and it worked pretty well after my first turned 2. But how can you
manage to be so productive with a 1-year-old around? When I cook dinner
each night, my 1-year-old often tears the house apart. So yeah, I got
something done, but I have to spend just as long after wards cleaning
up. Do you use a playpen? My 4-year-old would be a good helper during
ONE of these projects, but she would lose interest after that and start
fighting with her sister instead or (if I'm lucky) go off and read or
play by herself.

Well, I think the real answer is that Kaitlynn is only 16 months old and she still takes two naps each day–that's usually when I get the most work done here! She is a very busy little girl when she's awake so I must always be near her to make sure she stays safe and nothing catastrophic happens!

This morning, while she wasn't napping, I had her playing in the kitchen with some different toys and objects I gave to her. I also gave her a snack and that kept her preoccupied for awhile. But things did get a little messy–which I fully expected.

Kathrynne (3 1/2), on the other hand, is usually a great help to me. This morning, she helped with watching Kaitlynn, picking up toys, dicing chicken (with a plastic knife, of course!), and making pancakes. With some training and practicing, she's learning to be a real asset to me–which I'm definitely going to need once baby #3 is here!

When Kathrynne wasn't helping me today, I gave her some special things to play with/work on nearby including foil (this is one of her very favorite things in the world to play with!), and crayons and scissors and glue which she used at the kitchen table for a very long time.

My biggest advice to young moms out there is to make sure that you put your children as the most important priority in your day. Expect that your home will look lived in and you will get less done when little ones are underfoot; it's a fact of life!

I've had to learn to lower my expectations a lot since having children. I'd rather get a lot less done in the day and have invested quality time with my children, than have gotten a huge, long to-do list done and neglected my family in the process. They are only little once and I never want to forget that fact!

By the way, if you have little ones and are struggling with how to "do it all", I love the advice given by Jennie Chancey (mom to many little ones) here. Her words and thoughts have been a real blessing and help to me in navigating this incredible (and sometimes overwhelming!) task of mothering!