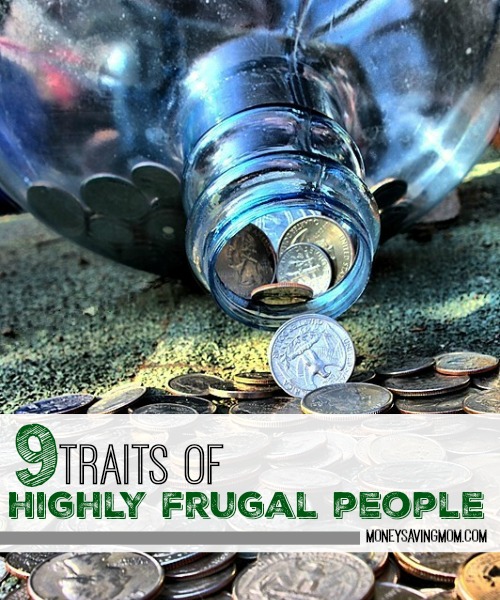 Guest post from Erin of The No Drama Mama

There are a lot of misconceptions about what it means to be “frugal”.

Many people have the misconceptions that frugal people are “poor” or “cheap”. Of course, frugal people CAN be poor and/or cheap, but they can often be very generous — and even well off!

And in my opinion, the difference between HIGHLY frugal people and others is that they don’t announce it to the world. While others may think frugal people have a love or lack of money, what they actually have is RESPECT for it.

1. They Persevere in Hard Times

It’s not that frugal people live worry-free lives, it’s that they know how to pick themselves up and keep moving forward instead of getting mired down by their current financial situations.

When we lost two cars in the same week, I was worried for a few minutes, but my thoughts immediately shifted to, “What’s the next step?”

Life is going to throw curveballs without warning so we’ve got to have our catcher’s mitt on all the time. Highly frugal people know it makes no sense to dwell on our current situation when we need to get busy finding a solution and moving forward.

2. They Have Thick Skin

Even though I’m a sensitive person by nature, I truly have a thick skin when it comes to other people’s opinion or perception of my family’s finances. My husband was shocked when an acquaintance indicated that he thought we were in financial need.

3. They Care About the Little Things

While friends may scoff about using coupons or returning our soda bottles to the store, highly frugal people know that the little things matter. It’s not about saving pennies, it’s about respecting all the little ways we can use our money wisely to pursue our larger financial goals.

While others may not understand how small savings can add up to financial success, highly frugal people know that when you watch the ounces, the pounds take care of themselves.

4. They Have Multiple Plans

Highly frugal people have budgets, debt repayment plans, and goals written down. They always have their eye on the bigger picture and like to track their progress.

5. They Learn From Their Financial Mistakes

It’s not that highly frugal people haven’t made financial mistakes, it’s that they vow never to make the same mistake twice.

While others may be steadily racking up debt, highly frugal people are cutting up their cards, reading books on personal finance, and finding side jobs to pay off their debt. They remember the stress and burden it causes and use it as motivation to never let themselves be in that situation again.

6.They Wait for What They Want

Whether it’s waiting to buy a house, a car, or even new clothes, highly frugal people don’t just run out and purchase what they need the instant they need it. Instead they wait, save, shop around, and analyze all the options.

When my husband and I decided to have a third child, we knew we’d need another bedroom so we started saving to renovate our house. We also purchased some of the materials two years before we started any of the renovation that would turn our basement into our new master bedroom. We were able to pay all cash and incur no debt simply by waiting a little longer for what we wanted.

7. They Are Willing To Stand Out

While some are splurging for the latest and greatest cell phone, highly frugal people are rocking their phone with a pre-paid plan from three years ago. If you’re extremely frugal you might not even have a cell phone at all (GASP!).

I have personally been mocked by young children for not having a cell phone, but since I work from home I know people can call me on my landline or simply wait to talk to me if I’m out. I would rather use that money to pursue our goal of becoming debt-free.

8. They Find Inspiration in the Past

My grandmother is still the biggest influence in my life, years after her passing. She taught me so many valuable life skills and is the biggest inspiration for my frugal lifestyle.

While the rest of society is pursuing newer and “better” methods of doing things, highly frugal people are finding inspiration from past generations. We’re learning to sew, grow our own food, use things up, and upcycle our outdated things, all in an effort to save money for the things that are truly important to us.

9. They Are Vigilant of Spending

I think of myself as the warden of our family finances, nothing goes in or out of our bank account without me knowing about it. I know what bills are scheduled to come out, and I check our account online every single day.

Highly frugal people don’t like to overdraw accounts or be blindsided by unexpected expenses. Being vigilant and having a budget isn’t the prison some people think it is. It actually gives you the freedom to decide when and where to use your money.

If you’re a highly frugal person, you’re in good company. There are many successful frugal people living all around you… because there’s a good chance they don’t live in mansions, they might live in YOUR neighborhood.

Erin Johnson a.k.a. The No Drama Mama can be found writing about faith, family and frugal living on her blog The No Drama Mama when she’s not caring for her three adorable kiddos. This “tell it like it is” mama has NO time for drama, so forget your perfect parenting techniques and follow her on Facebook or Twitter for her delightfully imperfect parenting wins and fails. Her work can also be found on Mamapedia, Worshipful Living, and Hudson Valley Parent magazine.