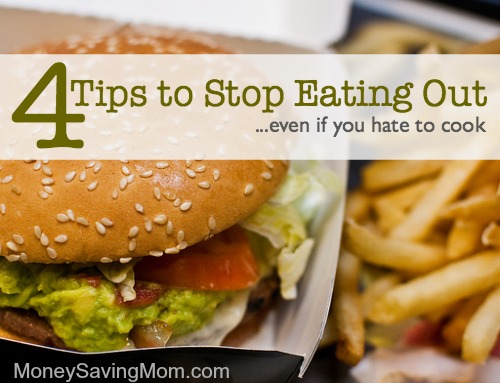 It pains to me admit this, but June was the first time I haven’t eaten out for an entire month in years.

You see, over the past year I had developed a really bad habit: I started eating out all the time. To be honest, I was going through a drive thru about five times a week.

Something had to change.

In May of this year, I started cutting way back on our eating out; and in June, I stopped completely — cold turkey. I can proudly say that we didn’t eat at a restaurant one. single. time!

And it felt good.

I know there are many others out there, like me, who may be embarrassed to admit they have this same problem. So I want to offer you a solution. Here are a few suggestions to help you stop eating out, even if you hate to cook:

After meals were cooked and the mess was made it was then time to roll up my sleeves and hand wash the dishes the old fashioned way. And between working and picking up after two young kids, cleaning up a big kitchen mess was the last thing I wanted to do.

That changed this year when I finally had access to a dishwasher. I cannot even begin to explain what a huge help this has been to me.

I discovered that I really didn’t hate cooking. I hated cleaning up the mess. The dishwasher I have is pretty old and could probably be found on Craigslist for $50 or less. But it gets the job done!

2. Stock Up at the Grocery Store

This might seem a little ironic but I’m actually pretty cheap. Yes, I would go through the drive thru five times a week but when it came to grocery shopping I wanted to spend as little money as possible.

I would buy the bare minimum.

At the beginning of June I decided I’d have to change my ways. Instead of buying the bare minimums I started stocking up on the things that I needed. This included buying several bags of chicken breasts when Kroger recently had a sale and also stocking up on flour, sugar, and other staples.

I also have a garden, so we’ve been using the produce from that for side dishes.

A dinner for us would be some type of meat (chicken several times per week) either cooked on the grill, crockpot, or baked and cut up vegetables on the side.

We’ve also made several batches of the best zucchini bread ever and froze a few loaves. I’ll often thaw some out and add it as a side.

After seeing the 40 crockpot meals in 4 hours post I decided I’d do something similar. Instead of cooking 40 meals though, I keep about five in my freezer.

A family friend recently gave me a ton of roast they had from one of their cows and I’ve put several small roasts into freezer bags along with other ingredients.

Now on those busy days when I know I’m not going to cook I can just empty my freezer bag meals into the crockpot and come home to a nice, hot meal.

And the cleanup is a breeze.

My month-long experiment has taught me several things — one of the most important is that home cooked meals are so much better than anything you can get from a dollar menu.

I feel like I’ve turned a new leaf. Not only am I feeding me and my children healthier, more nutritious food, but I’m also saving hundreds of dollars a month!

Alexa is a work-from-home-mom who loves online business. When she’s not playing with her kids you can find her glued to her computer. She chronicles her journey as a single mother trying to make it big at Single Moms Income.