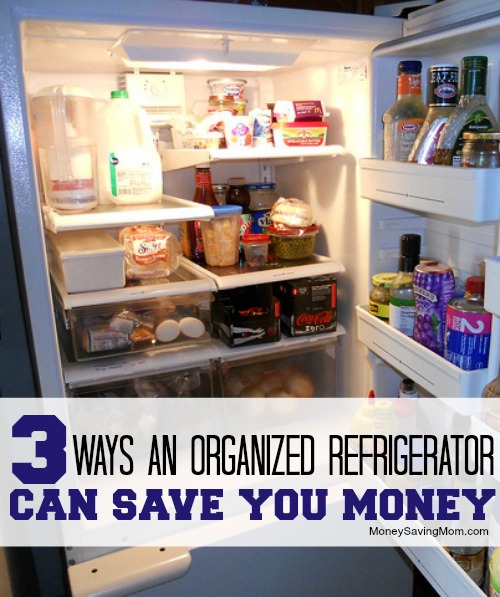 Guest post from Megan of Frugal Finds During Naptime

“Yuck!” I said out loud, as I was completely grossed out by it.

Upon further investigation, I discovered it was a cucumber… rather, what was left of a cucumber. The remnants (that were not oozing out of the bottom produce drawer) were still in the produce bag from the grocery store.

As I began to clean up the mess, I found other leftovers I had forgotten about. Of course, these leftovers were no longer edible, and I was a little saddened by it. Not because I just love leftovers either, but because it made me realize how much “money” I was throwing away in my garbage can all because I didn’t have an organized refrigerator.

If you can relate, here are three ways having an organized refrigerator can save you money in the long run:

1. You Will Use Up Leftovers

If your refrigerator is organized, you can clearly see your leftovers, and can then make plans to use them in other meals.

For example, as I was throwing away a small container of leftover taco meat, I realized that it would have been just the right amount for my girls to have tacos for lunch.

When you can clearly see what is in your refrigerator, you won’t purchase the same items you already have.

With a full refrigerator, you can’t find things quickly; therefore, you will (more than likely) be standing there with the door open longer. This, in turn, causes your refrigerator to work harder and your electric bill takes the hit.

All of these may seem like little things; however, they quickly add up over the course of a year, or even a month.

When you’re trying to lower your grocery bill, save money for a vacation, or get out of debt, taking an afternoon to organize your refrigerator, meal plan with the leftovers, and commit to keeping it organized can help you reach your goals!

Megan is a frugal, couponing, stay-at-home mom to two girls {ages 5 and 2}. She enjoys finding deals, and breaking it down to small, easy-to-do scenarios to help others learn to save money. You can find her at Frugal Finds During Naptime where she posts deals, money-saving tips, her trips to the grocery store, and writes about lessons she has learned as a mom.