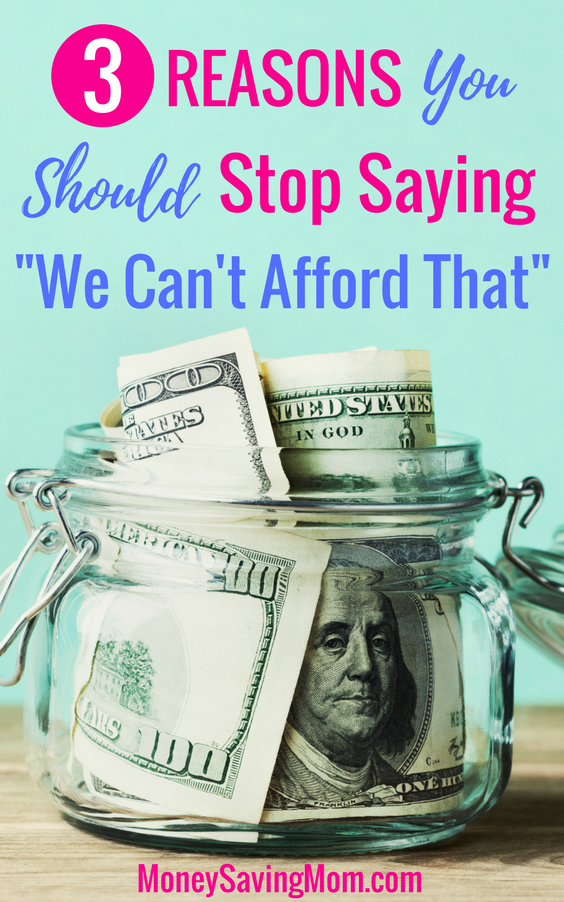 “Sorry, we can’t afford that.”

I know it seems like this would be a common phrase for frugal people, but I want to challenge you to take those words out of your vocabulary. Here’s why…

When you use that phrase, you’re saying that you’re a victim — that you have no control over your financial situation, that you are living in bondage to your budget, that you’re stuck, that there’s no way out, and that you can not make any choices because your finances are dictating your decisions.

But here’s the thing! You’re actually making a choice not to buy that item. It’s not because you can’t afford it, but rather because you’re choosing not to afford it or buy it right now.

You might be thinking, “No, really. You don’t understand. We actually can’t afford it.”

My push back to you is that there is always a way to afford it. You could work crazy hours, run yourself ragged working two jobs, become a workaholic, run through life exhausted, go into debt, take out a loan, or get help from a family member.

I bet if you did one of these things, you could “afford” it, but you’re instead choosing not to spend your money on that item right now. You’re choosing an intentional life and wise financial decisions. You’re choosing short-term sacrifice because of your long-term dreams, goals, and visions about where you want to be some day.

When you use the language that you can’t afford something, it’s discouraging. It makes you feel trapped and you think, “Why even bother?” It causes you to lose hope.

But when you turn it into something you have a choice over, it creates a victory mentality that is SO empowering and hope-filled! It gives you forward momentum, so that you don’t feel stuck in bondage to your budget.

When you look at your finances with a hope-filled mindset, you’ll be inspired to move towards your future one small baby step and smart decision at a time.

Maybe you don’t have a ton of wiggle room in your budget, but you can change your future by making tiny, wise choices along the way. These small choices will build smart habits which will move you in the right direction and get you on the path towards eventually changing your life.

When you change your mindset that you can make choices, it sets you free from feeling trapped and gives you momentum and encouragement!

Your mentality and the language that you speak makes such a difference in your attitude and how you live. If you have the attitude that you’re stuck, you’re probably going to stay stuck. But if you have the attitude that you’re making the best of a difficult situation, you’ll be able to choose contentment, cultivate joy, bloom right where you’re planted, and ultimately have much more hope and creative inspiration.

3. It puts you in a comparison mentality.

When you look at what other people are spending their money on and think, “Oh, we could never afford that,” it sends you into a comparison mentality. And that is one of the quickest ways to get discouraged and lose momentum, because comparison is the thief of joy.

You may not be able to do what someone else is doing, but I bet you can do something. Aim to do what you can do right now. Do small things a little bit at a a time, and you will eventually see the benefits from those efforts!

Choose to make the most of your situation, and you’ll create freedom and contentment for yourself.

When Jesse was in law school, we made a big commitment to stay out of debt. There were times when it was really difficult, because we were the only couple in the law school group choosing to not take out loans.

Everyone else was living the attorney lifestyle while still in law school — buying houses and cars, having fun, going on expensive trips, and going out to eat. And we were just trying to survive in a basement apartment with a beat-up car that sometimes didn’t start, wondering how we would pay the bills, and trying to stretch our grocery budget.

It would have been really easy to get discouraged and compare ourselves to other people. Comparison could have really destroyed our momentum and hope. We could have said, “This is too hard. This isn’t fair. We can’t afford to do anything. We give up.”

Instead, we chose to say, “We are choosing to live like this now so that we can have long-term benefits from it. We have a vision of what we want our life to be like some day, and we want to remain debt-free on our journey towards that goal.”

It wasn’t always easy, and there were definitely days we wanted to throw in the towel and give up, but we did the best we could do in our situation. We chose to cast off comparison and be content with our choices that were propelling us towards our goals.

So I challenge you to change your language and see it as a fun game that you’re choosing to stretch your money as far as it can possibly go! You can choose to make choices now so that it will pay off long-term in a big way.