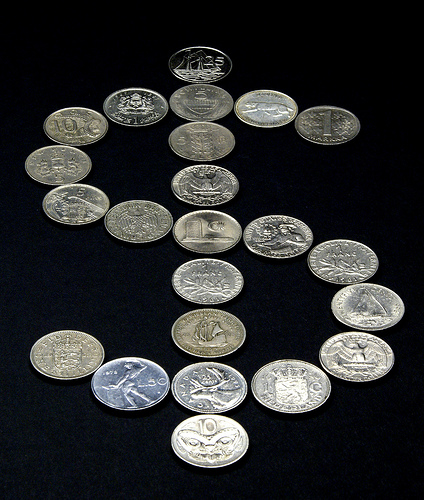 Paying with cash…we all did it at one point. When you are a child and are too young to have a credit card or debit card or checkbook, it is quite socially acceptable to pay with your allowance or hard-earned lemonade stand money.

At some point in our society, though, paying with cash becomes more unusual. I, like most Americans, have a credit card, and since we pay it off in full each month, I always thought I was being as responsible as possible with our finances.

But as I started to learn about deals, I became intrigued by this Envelope System that I read about (you can read about it here, here, and here). Could it possibly help me to be a better steward of the money we’ve been given?

I decided to give it a try–but on a smaller scale. Our budget for groceries and consumable household supplies (soap, detergent, toilet paper, etc.) is $40 per week and I do almost all of the grocery shopping, so that seemed like a logical place to start. So it began.

Here’s basically how it worked for me:

As I headed out to go grocery shopping on my first cash-only day, I stopped by the ATM and took out $40. I stuck it in an envelope and only used that to pay for all of our groceries. If I happened to purchase other items (gifts, clothing, etc.) while I was grocery shopping, I just asked the cashier to do separate transactions.

The following week, I added another $40 to the change from the previous week. And this same pattern has repeated now for about three months. It seems so simple–but it’s teaching me a lot about how I shop.

Here are six lessons I am learning:

1) No Mental Math Needed–Before trying out the envelope system, I would mentally try to add up how much I had spent at various stores in my head to see how much I had left. Well, if you’ve ever taught mental math, you know that estimation is an oft-used strategy. Needless to say, I often went over my budget using this strategy (without even realizing it until checking our statements later).

Many weeks, the amount was as little as $5, but that adds up to $260 over the course of a year–the equivalent of over 6 weeks of groceries on our budget! With the envelopes, figuring out how much I have left to spend is easy–just look in the envelope.

2) When You’re Done, You’re Done–It was so tempting for me to “borrow” from future weeks before trying out the envelope system. If I found a great deal, or just really wanted to make a particular recipe, I would just tell myself I would spend less the next week. Of course, when next week rolled around, I would have either forgotten or have convinced myself that I should go ahead and spend the full budgeted amount. Having a certain amount in cash has really helped me develop the discipline of saying, “Enough’s enough.”

3) Jell-O is Not a Food Group–Although I try to stockpile, there are certain staples that we need to get pretty regularly (like milk, eggs, fresh fruits, and vegetables, etc.). The first week that I tried out the envelope system, I realized something very important: If I do the “deals” first and then look to buy the staples, I’ll run out of money and have to decide between eggs and milk.  Although I meal-planned and shopped off of a list before going cash-only, I now prioritize my list based on what we need and what we can do without.

4) What’s the OOP (really?)–Check out many deal forums and you’ll see a discussion on a “free” item, only to realize that you’ll get a gift card/Catalina/ECB/Register Reward when you purchase the item for the amount you spent.  Before the envelope system, it was really easy to let myself believe that I was getting the item for free–but what I’ve learned is that when I pull out some money from that envelope, that’s money I no longer have to spend.

Although I might have a money replacement, I am often limited on where and when I can use it. That doesn’t mean I never do these deals, but it does help me to be much more aware of what my real out-of-pocket expenses are and I don’t justify going over my budget by saying that I’ll get a gift card back.

(Note: I know “rolling” gift cards and Catalinas makes for some great deals; I just think it was easy for me to forget they actually cost something to start with.)

5) Life Will Go On–If you are anything like me, discovering the world of coupons and deals was a turning point in my life (“You mean I don’t have to pay for toothpaste or razors ever again?”). I will admit that during the first few months, I went a bit overboard.  I felt the need to do every deal and print out every coupon.

With the Envelope System, I am learning to let go of some of the deals and I am finding out that it is okay–we still have more than we need.

6) Rely on the Lord. I like being in control and couponing fed that feeling for me. I know more about “the systems” than most cashiers around here and I know what I am able to get for free or really cheap.  I found that putting limitations on my couponing (through having to prioritize, miss deals, etc.) has helped me to remember the real Source of all that we have and consequently not worry about it.

So, what’s the bottom line? I tried out the envelope system thinking that I might save some money, and I have. More importantly, though, I’ve learned lessons that will help me to be a better steward of the money we have. I don’t know if the rest of our lives will transfer over to the Envelope System, but I know the things I’ve learned will.

Note: These are simply lessons I am learning; I don’t suggest that they are universal to all bargain shoppers. However, I would encourage you to try out a cash-only system (even if only for groceries) and see what you learn about yourself. You just might be surprised!

Jenny Whitney is a stay-at-home mom of a lively one-year-old son. She is learning to be a loving graceful wife and mother, happy homemaker, and responsible steward of all of her resources.

From Crystal: Do you follow The Envelope System or have a cash-only policy for some or most of your purchases? If so, I'd love to hear how it works for your family. If you'd like to learn how it works for us or how to get started making it work for you, too, you can check out my article here.