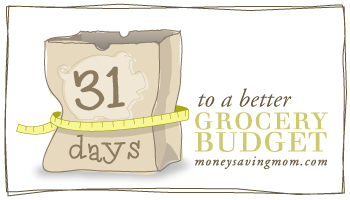 Missed the first posts this series? Read them here.

When I mention how I save a lot of money by shopping at more than one store, I’m often met with resistance:

“But I don’t have time to go to more than one store! I can barely make it into Walmart once a week.”

“That’s not saving money! You’re wasting all sorts of time and gas running around to fifteen different stores in one day. Wouldn’t it be more cost-effective and efficient to just do all your shopping at one store each week?”

“I’m glad that works for you, but I don’t have near the patience or organization to even attempt something like that!”

Let me be clear: I am not advocating going to 15 different stores which are 45 minutes away from your home in order to save $2 at each store.

That’s not saving money, in my definition. Instead, that’s wasting enormous amounts of time and effort and producing little to show for it but wear and tear on your vehicle and an exorbitant gas bill.

What I am advocating is taking a little bit of time to scout at your nearby stores each week and pick a few which have the best sales and deals. Then base your grocery trip planning on shopping only at those stores.

Last week I flew to Baltimore and ended up spending quite a bit of time at the airport between my four different flights and layovers. I only packed one checked bag since I also had Silas, a stroller, a laptop, and a diaper bag. So I had limited space to bring snacks to eat on my flight days.

Because of this, I ended up buying a few items at the airport stores to tide me over for breakfast and lunch. Instead of just going to the first shop I found and plunking down whatever dollar amount they were asking, I took five minutes to survey my options.

I quickly walked over to each of the shops within a minute of where I was and checked out their menu boards and prices. By doing this, I was able to put together a relatively healthy meal for less than $6. While that number might seem high–and it is!–compared to how expensive some of the meals were at the airport, I definitely saved at least $3-$5 by taking five minutes to check out my options.

$3 to $5 in savings for a little walking and five minutes is a pretty good investment, in my opinion. In fact, if I were to save $4 every five minutes, that’s like saving $48 an hour–which isn’t an hourly wage to sneeze at! Plus, did I mention that when you save money, it’s tax-free?

In the same way, by putting forth a little bit of effort and learning what are the best deals for your area and picking a few stores to shop at each week that are running the best sales, you can get rock-bottom prices on your groceries and save significant amounts of money each week.

Tomorrow, I’ll share some step-by-step ideas for getting started shopping at more than one store while keeping it simple and not wasting a lot of time, effort, and mileage to do so.

Do you shop at more than one store for groceries? If not, what’s holding you back from doing so?