Save Up to $20 Per Year By Switching Fonts 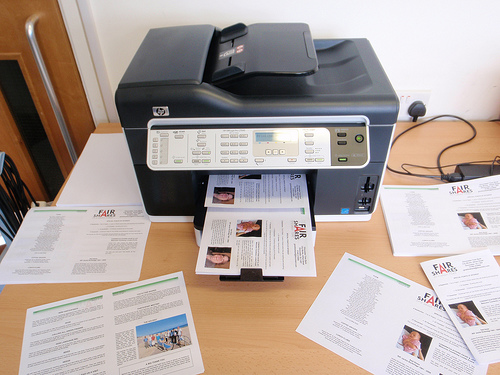 Rochelle from Scripture Adventures sent me the link to this fascinating article today. Maybe you all know this, but I certainly didn’t:

MILWAUKEE – Here’s a way you might save $20 this year: Change the font in the documents you print.

Because different fonts require different amounts of ink to print, you could be buying new printer cartridges less often if you wrote in, say, Century Gothic rather than Arial. Schools and businesses could save thousands of dollars with font changes.

Data on the subject from Printer.com, a Dutch company that evaluates printer attributes, persuaded the University of Wisconsin-Green Bay to make a switch. Diane Blohowiak, coordinator of information-technology user support, has asked faculty and staff to use Century Gothic for all printed documents. The school also plans to change its e-mail system so it uses Century Gothic.

“The feedback we’ve gotten so far has been positive,” she said. “Century Gothic is very readable.”

The school of 6,500 students spends about $100,000 per year on ink and toner cartridges. Although students and staff can change the default font to something more ink-intensive, Blohowiak said the university expects to save $5,000 to $10,000 per year with the font switch.

The amount of ink a font drains is mainly driven by the thickness of its lines. A font with “narrow” or “light” in its name is usually better than its “bold” or “black” counterpart, said Thom Brown, an ink researcher at Hewlett-Packard Co., the world’s top maker of printers.

Also, serif fonts — those with short horizontal lines at the top and bottom of characters — tend to use thinner lines and thus less ink than a “sans serif” counterpart.