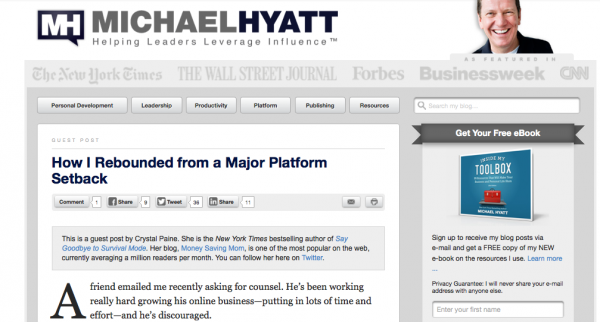 I’m honored to be guest-posting on Michael Hyatt’s blog today. I’m sharing a really recent major business setback we experienced and what I’m learning through the process. I hope that my story and struggles can encourage you in your journey — whether in your business or personal life.

A friend emailed me recently asking for counsel. He’s been working really hard growing his online business—putting in lots of time and effort—and he’s discouraged.

While he had seen some really significant growth for a few months, it now feels like it’s at a standstill or even dropping off. He’s frustrated because he’s put in so much effort and it feels like he’s just not seeing the results he’d like to see.

I could relate to him in many ways, because I’ve had a similar major setback in my business in the last few months. For months, my Facebook Page had been growing like crazy—to the tune of thousands of new followers every single week!

I’d experimented with a lot of different things and found a system for how and when to post that was working incredibly well to keep engagement and click-throughs really high.

For months, this system produced amazing results: our Facebook followers grew by over 200K in 2013, our traffic numbers doubled, and our unique visitors almost doubled. The growth was phenomenal and it was all organic, without us spending any money out of pocket to advertise on Facebook.

And then, in February of this year, we had a Facebook post go viral unlike anything we’d ever experienced before. It was insane—and I was so excited!

But about five days later, something weird happened and it was as if Facebook decided to no longer show any of my posts to anyone. I’m not kidding…” 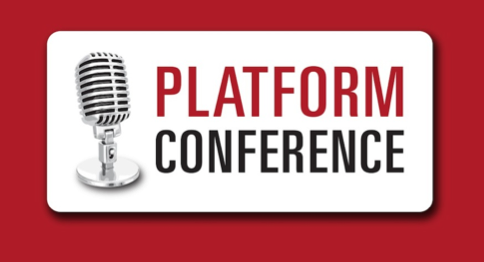 Also, at the bottom of the guest post linked above, I put in a plug for the Platform Conference. You know that I am very careful about what I wholeheartedly endorse — because I know your time and money is limited — but I asked Michael if I could include this plug on the post because I believe in this conference so very much.

You see, I went to the Platform Conference last year and it completely shook up my entire business plan from the ground up. I came home not just re-energized and re-inspired as a business owner and blogger, but most of all, I realized that I needed to make some major business changes if I wanted to be in this for the long haul.

Without a doubt, I can say that the money I spent to attend the Platform Conference was truly the best money I’ve ever spent on any conference in my life. Yes, it’s that good!

Do yourself a favor and go sign up for the Platform Conference. I’d LOVE to meet you there!