Home » LITE Feed (non-deal) Posts » Help! I’m trying to use coupons and my budget is increasing, instead of decreasing! 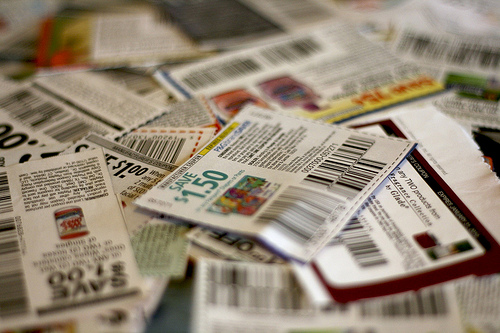 I love getting good deals, especially drugstore deals. Ironically, though, ever since I started shopping deals with coupons and RR or ECBs and rock bottom prices my grocery budget has stayed the same or increased. I think part of the problem is that when I see a good deal–something almost free or a rock bottom price, I feel like I have to get it. It hangs over my head if I don’t!

How do you navigate through deciding which deals to take advantage of and which to pass up, especially if that product may not hit its rock bottom again before you need it? I really want to stick to my grocery budget and even decrease it. Shopping deals should help–but right now it’s doing the opposite. -Britney

I love your question, Britney! And I’m going to wager to guess that you’re not the only person who has struggled with this before.

Here are a few of my thoughts and suggestions:

1) Designate a Portion of Your Budget to Stockpiling

It’s imperative that you have a budget, which is sounds like you do. So kudos on taking that first step — many people don’t have that in place, so you’re already one step ahead of the vast majority of Americans!

I think it would also be really helpful for you to designate a specific portion of your grocery budget (no more than 10% to 20%) for stockpiling. This way, you know that you only have $XX amount each week to spend on good deals. This will help you focus on getting the best deals and prevent you from going overboard or overbuying.

Note: For those of you who are feeling like you don’t have any extra room in your budget to designate to buying ahead, be sure to check out my post on how to eat frugally and still stockpile when you only have $30 to spend on groceries each week.

When deciding whether or not something is worth purchasing, first determine whether it’s in your budget. If it is, then decide how high up on the priority list it is.

Focus on your necessities first, before buying non-necessities. And don’t buy 15 jars of pickles at $0.25 per jar if you don’t even eat pickles in the first place! No matter how inexpensive something is, if you’re not going to use, it’s not a good deal to buy it.

3) Look for Ways to Save That Don’t Involve Coupons

You might find you can save more by making your own homemade cleaners instead of buying cleaners when they are on a great deal. Or, you might cut your grocery bill more by making inexpensive meals from scratch rather than spending a lot of time getting a great deal by combining coupons and sales.

What suggestions and advice do the rest of you have for Britney? I’d love to hear!