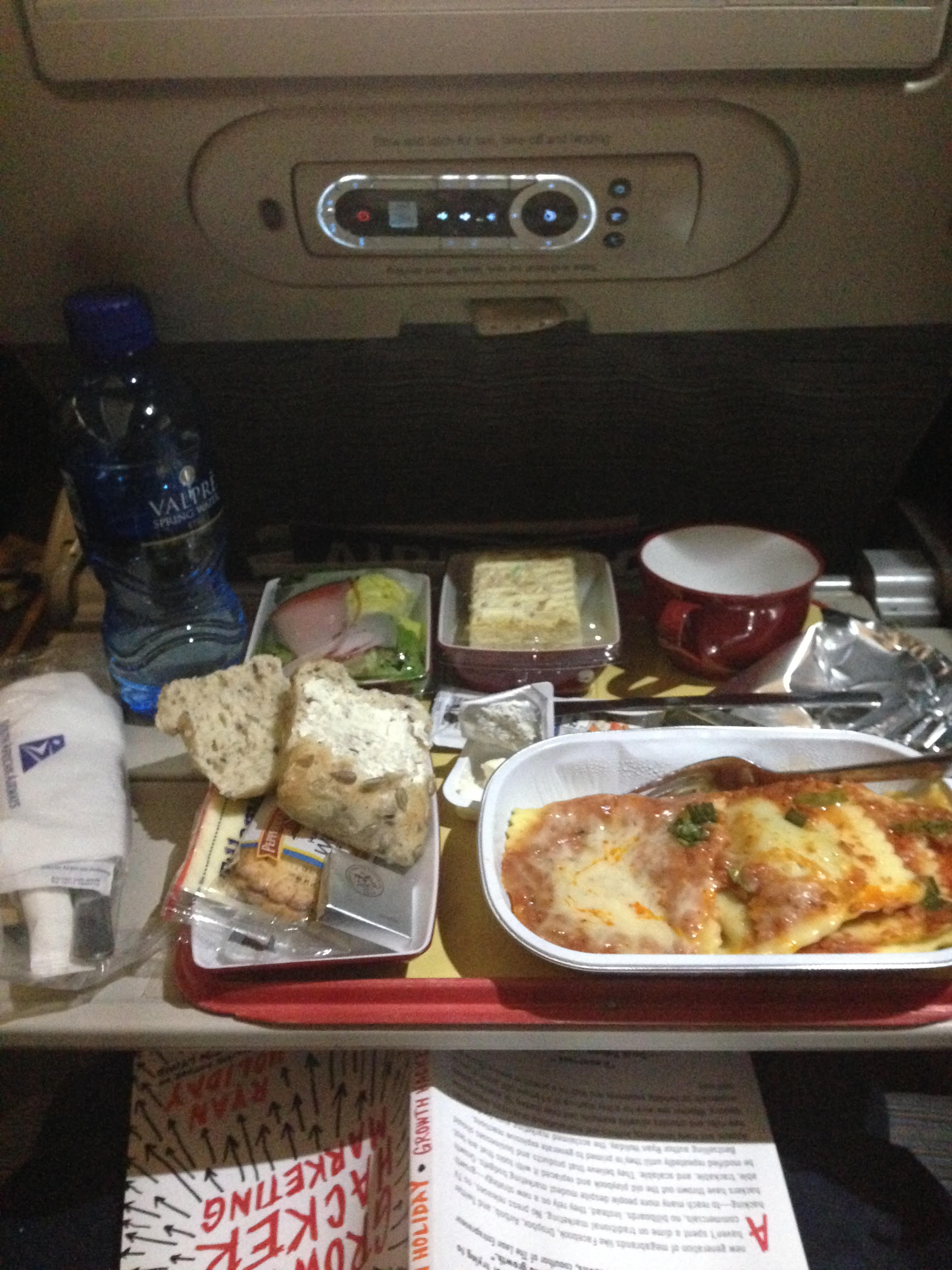 My first dinner on the plane: cheese ravioli. It was surprisingly good. And the cake was yummy, too!

One of the commitments I made to myself before leaving on my trip to South Africa was that I would try everything offered to me. Now, you might think that sounds rather simplistic and obvious… but you have to understand that I’m not really that much of an adventurous kind of person.

So for me to decide I was going to try everything offered to me was kind of a risky and “out-there” move. And it paid off… because not only did I get to experience more of the tastes of South Africa as a result, I really found that it was fun to live a little bit on the “wild side”, if you can call it that! 😉

Lisa-Jo had recommended that we order Appletiser on the plane. It’s a true authentic South African drink — basically like carbonated apple juice. It was delicious!

One thing I noticed while in South Africa was that they drink a lot of juice and other non-water beverages. They also drink a LOT of tea but aren’t much into coffee. Well, some of the restaurants we went to had delicious coffee drinks, but they don’t have Starbucks there and I didn’t see many coffee shops. It may have just been the area, though.

I can tell you that the second night we went to over to one family’s house for a Braai and I saw an espresso maker at their house, I may have just heard angels singing. 🙂

I discovered that Morne (the host) was a coffee aficionado and he was thrilled to find someone else who shared his love of coffee. He saw to it that I had good coffee the rest of the trip — even bringing a thermos of hot coffee for us to drink while we were on the jeep driving through the Game Lodge. 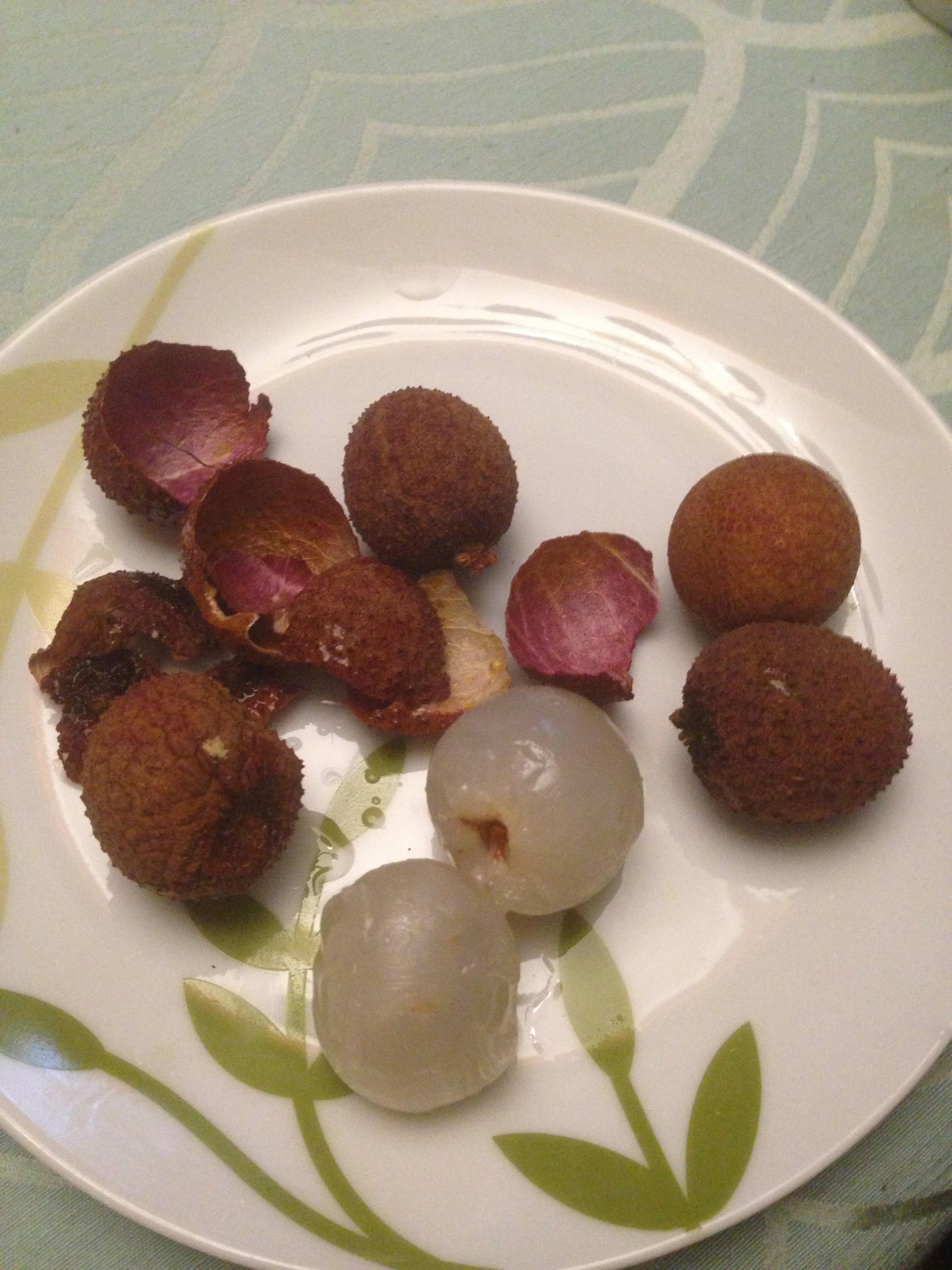 The night we got into South Africa, we had a fairly traditional dinner (lasagna, salad, etc.), but after dinner, Lisa-Jo’s parents pulled out some new-to-me foods, including Lychee (shown above). I’d never even heard of this fruit and thought it was delicious. We also had fresh mango, which was amazing!

And this was only a taste of what was to come. Throughout the week Lisa-Jo’s dad was constantly cutting up different fresh fruit for us, including the juiciest peaches I’ve pretty much ever eaten and fresh figs (I’m not sure that I’ve ever eaten fresh figs before. They were pretty good!) 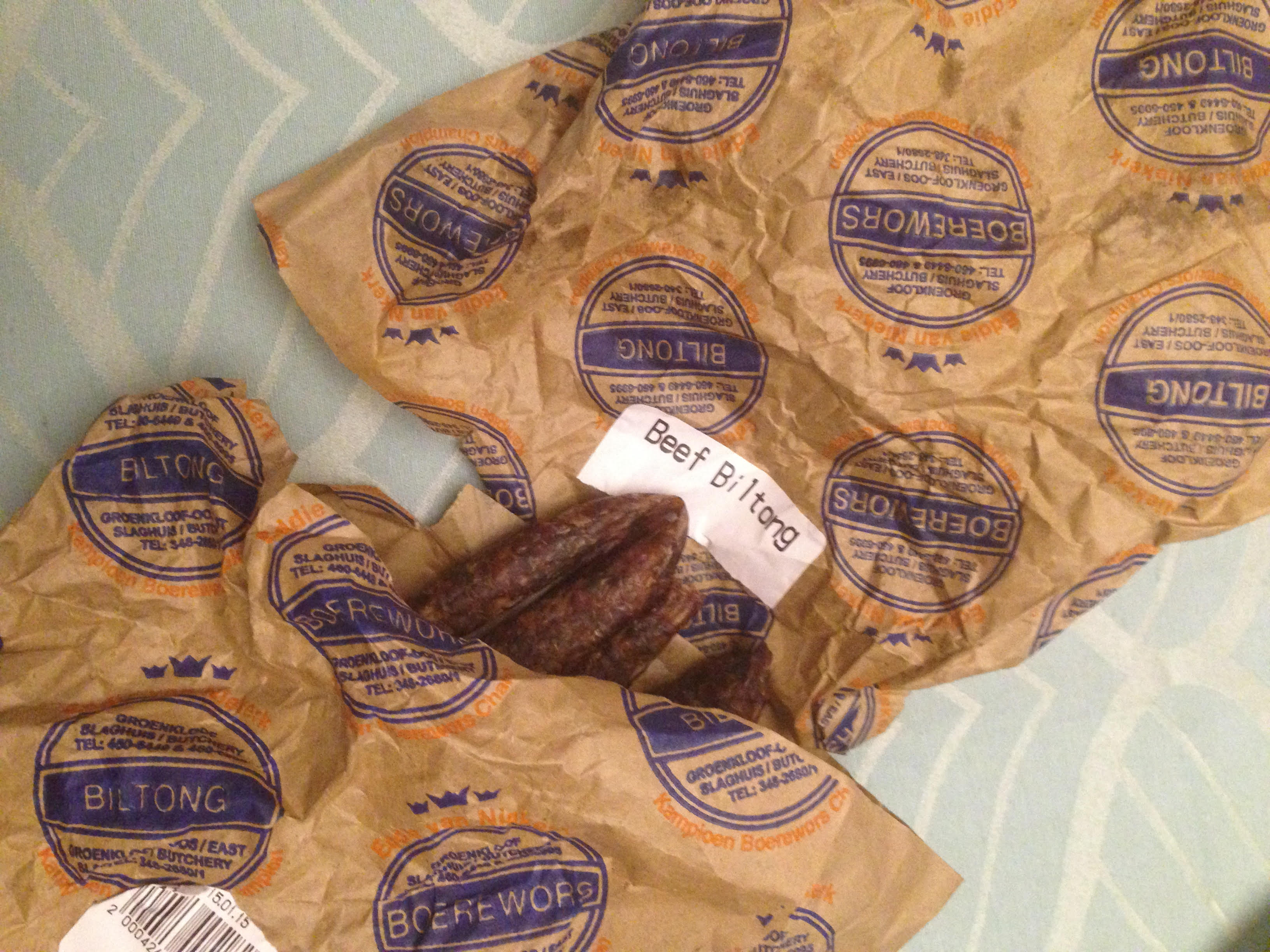 That night, we were also introduced to Biltong. The name and the look of it sounds a bit disturbing, but it tasted like really flavorful beef jerky.

Later in the week, Lisa-Jo’s mom took us to the meat shop where they actually dry the Biltong — it was hanging all over the place above the meat counter in long strips! — and we got fresh Biltong cut up right there for us. 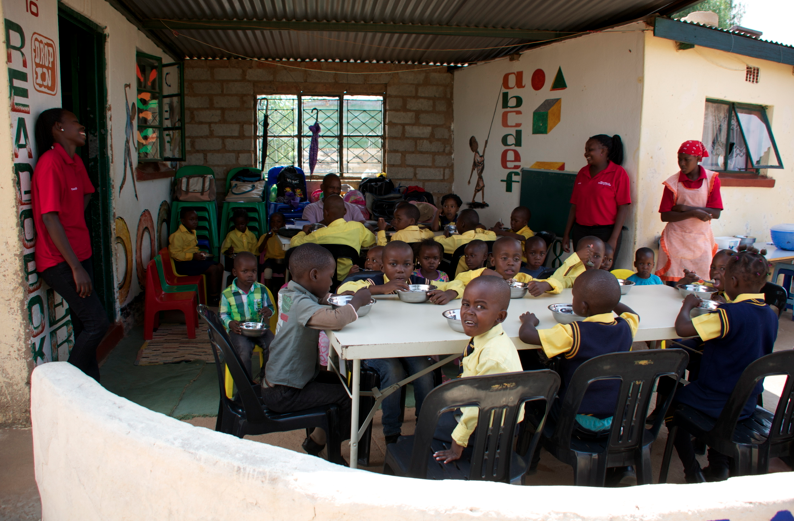 The first full day we were there, we visited the Reagaboka Drop-In Centre where they feed, play games with, and do afterschool homework help for over 100 kids every day. We got there right before they were getting ready to feed all of the kids. 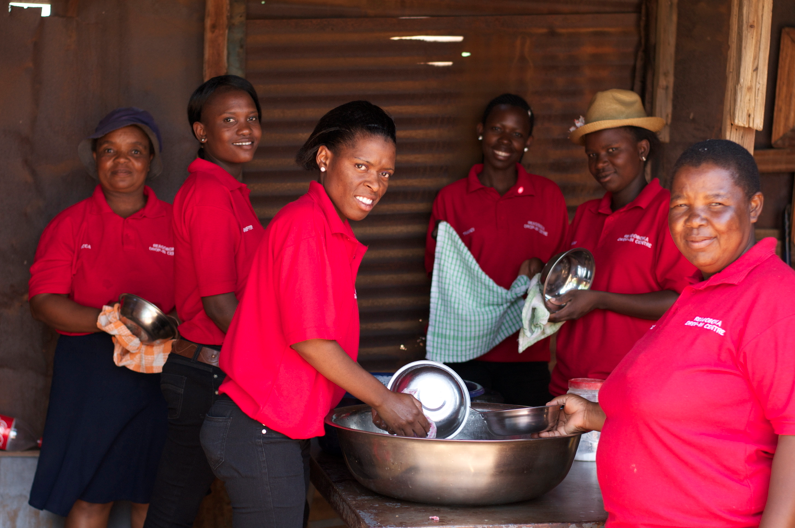 We got to see the Care Givers in action — serving lunch, working with the kids, etc. — and then they told us they had a special surprise: we got to eat some of what they served the kids plus some very traditional South African foods! 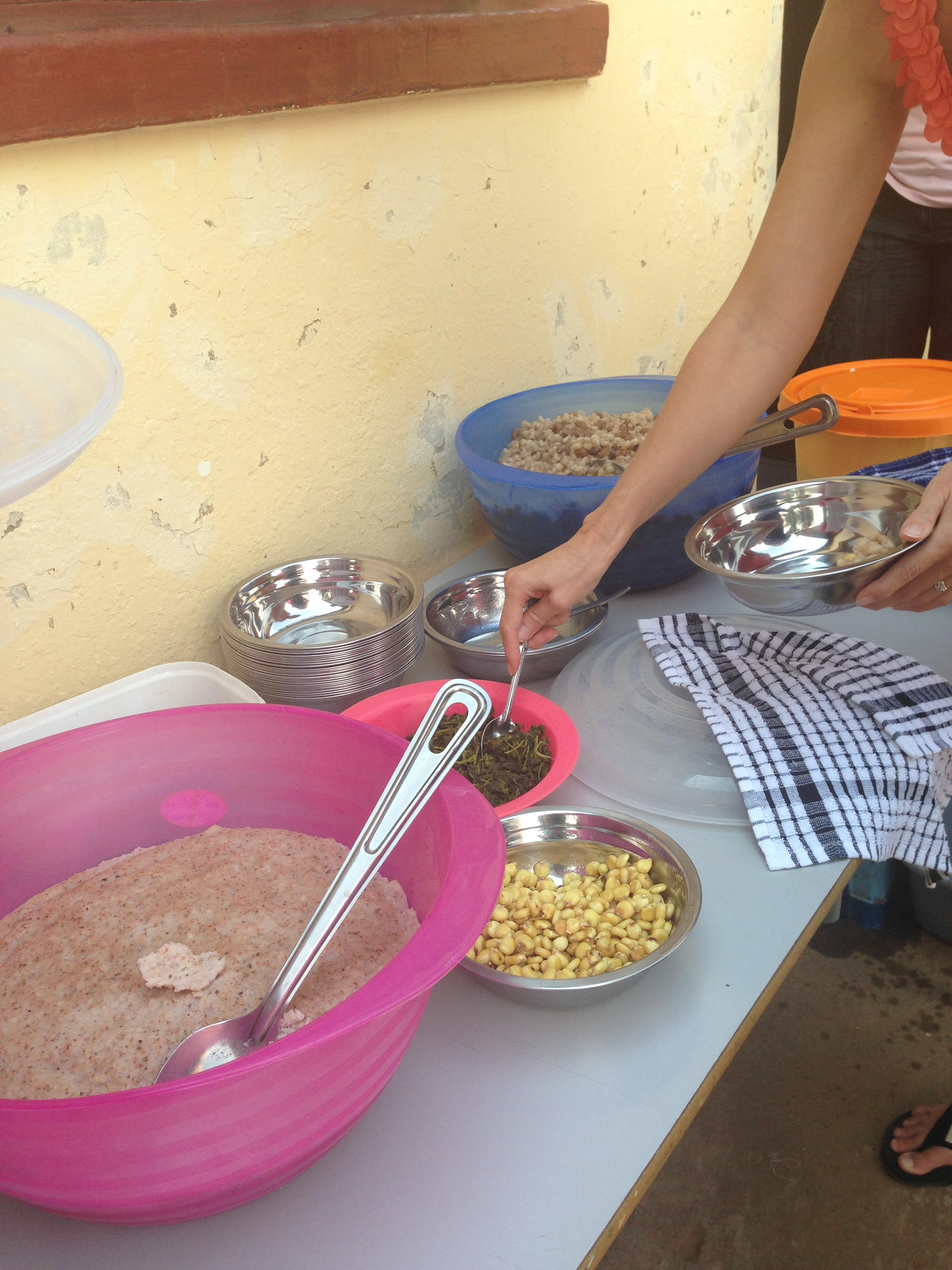 This was our lunch spread: Pap, Samp & Beans, Morogo, and Mealies (corn). 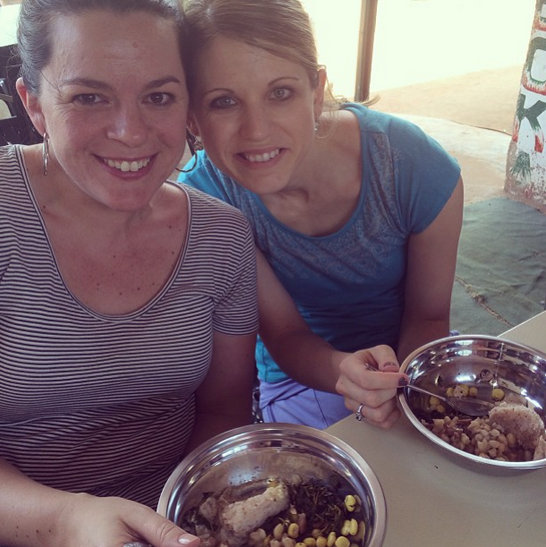 The Pap tasted really bland (I don’t think they put any kind of flavoring or seasoning in it because that’s typically how the kids eat it) and it was kind of overwhelming to realize that this is some of the only food that the poorer families have regularly. 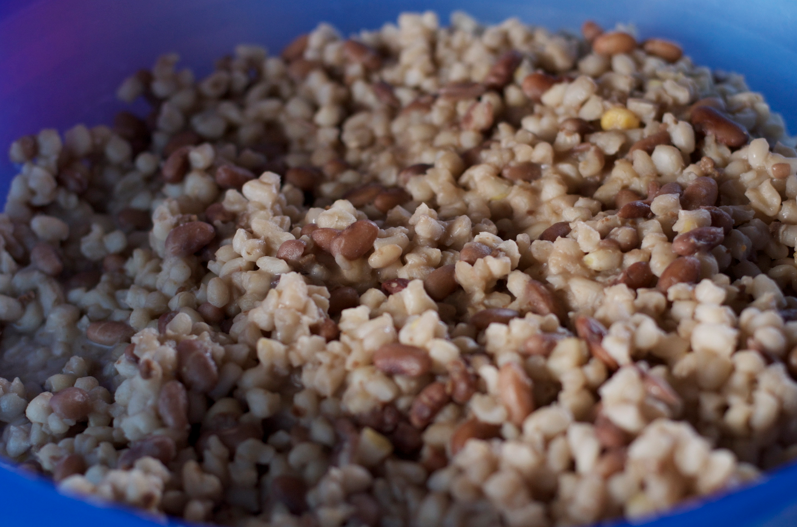 The Samp & Beans was very delicious and would eat it every day for a meal and not get tired of it. 🙂

The Morogo was wild spinach, they told us, and it tasted just like that — fresh, very green leafy, and like it had just been picked. “Mealies” is what they call corn. They had boiled it, but it was still kind of fresh and crunchy. 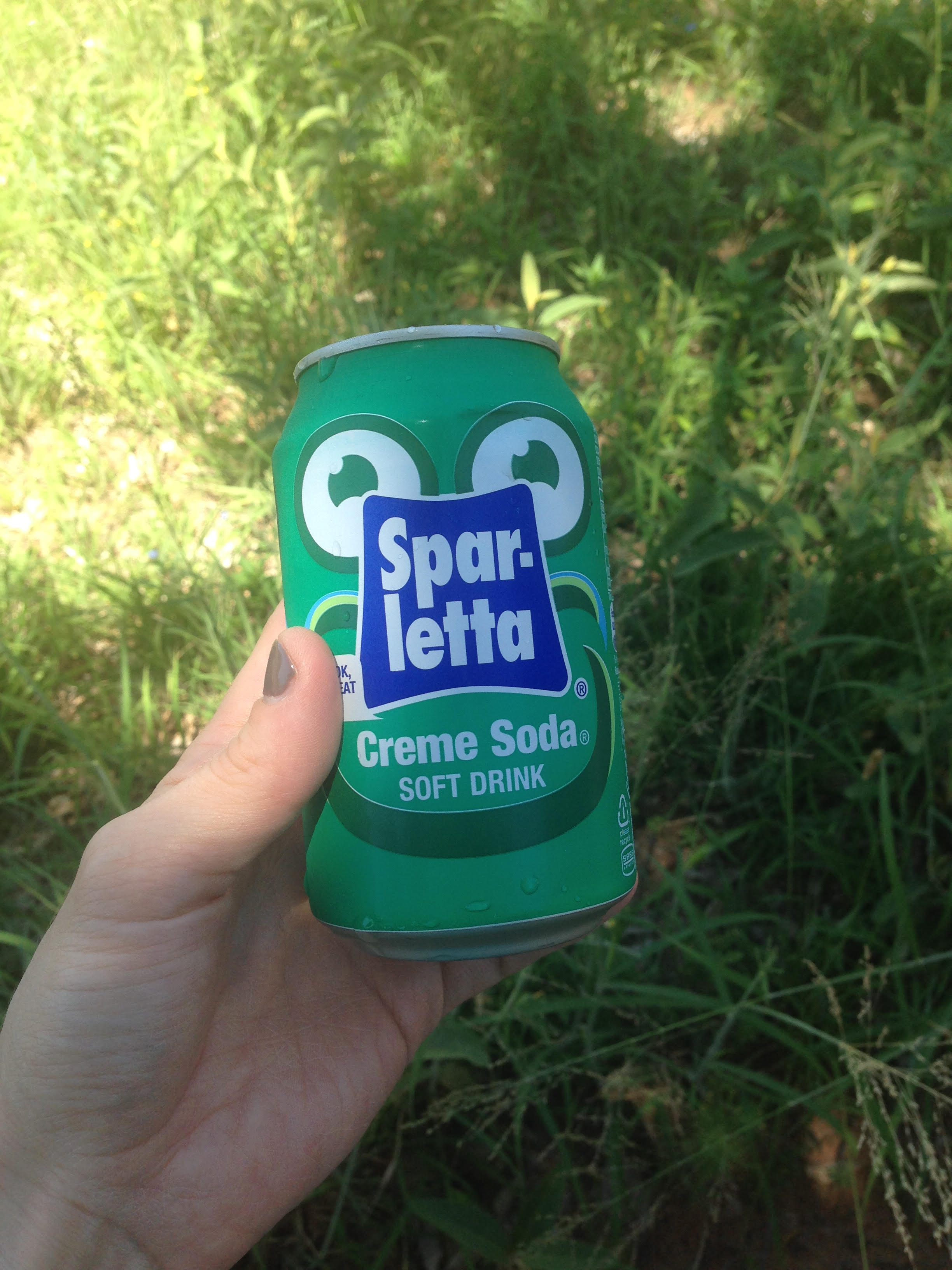 The next day, we went on a sort of safari ride at a Game Lodge — where we saw elephants, cheetahs, a giraffe, a mother rhino and her baby, ostriches, dung beetles, and much more. All roaming in the wild!

It was kind of surreal — especially because we were about 10 feet away from two elephants at one point. (See the video here.)

We stopped for snacks and drinks and they suggested I try the Creme Soda. It’s not like our American cream soda at all. It’s green and very sweet. I basically never drink soda, so this was quite a leap for me.

While we continued on with our drive, Joy offered me some of her Skittles and I ate those, too. So there I sat, the non-sugar-and-food-coloring-eating, non-soda-drinking girl from Kansas drinking South African creme soda (that turned my tongue and mouth green) and eating Skittles while riding in a big jeep on the African terrain and seeing giraffes and elephants and rhinos and cheetahs in the wild. And I was savoring every minute of it!

I kind of wondered if I was okay because it was so. not. like. me! 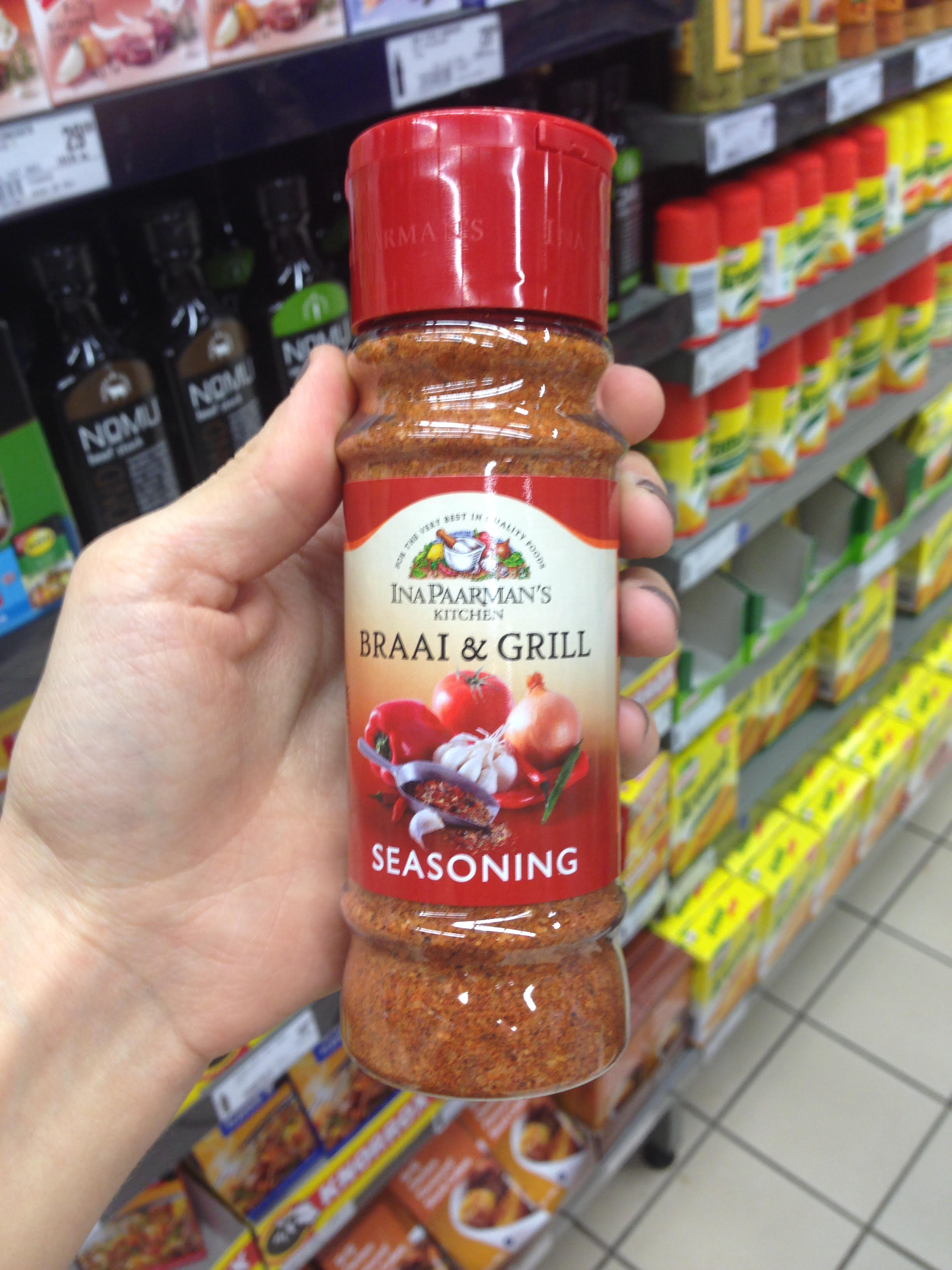 On the last day, we went to a South African grocery store — something I was very excited about. Because I’m weird and I think that grocery shopping is fun! Or at least it’s much more fun than clothes-shopping or shoe-shopping. 🙂

We went to Pick-n-Pay, which I am told is one of their less expensive grocery stores. They also have Woolworth’s Food, which I gathered was a nicer and higher-quality (and more expensive) grocery store.

The prices were very reasonable. At times, almost so low that we’d gasp. Not as low as they were in the Dominican Republic, but consistently quite a bit lower than in the states. 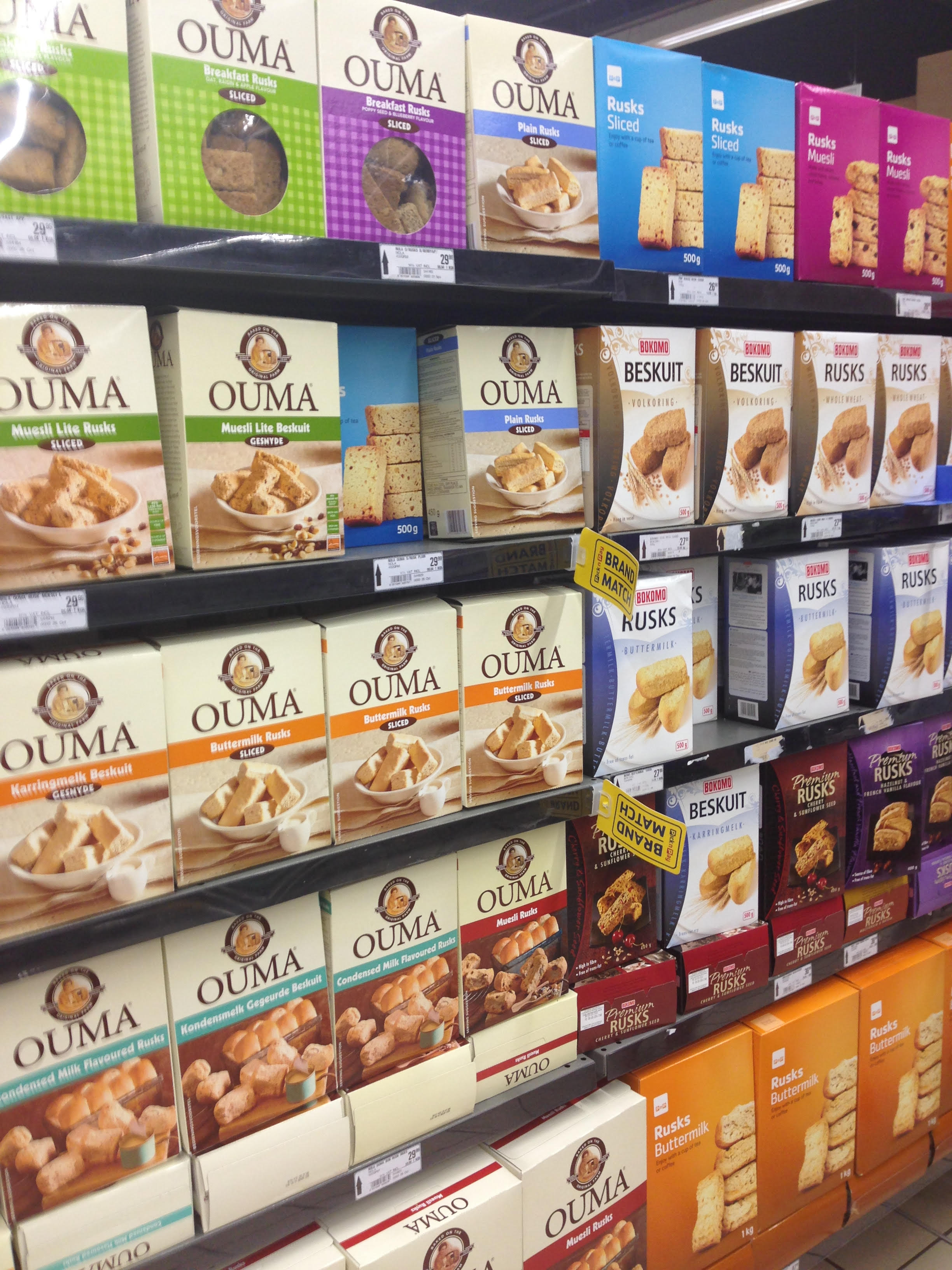 What was so weird is that the grocery store looked very identical to a grocery store in the U.S., but when you looked at the shelves, so much of what was on them were things we don’t have, brands I’d never heard of, and food I’d never eaten. Such as the half of aisle dedicated to every kind of rusks imaginable shown above.

It was a strange feeling to be able to read all of the boxes and brands and signs but to not be familiar with almost any of them. In fact, you’d have to look for quite awhile to see any packaging/brand/label that was the same as what you’d find in the U.S. 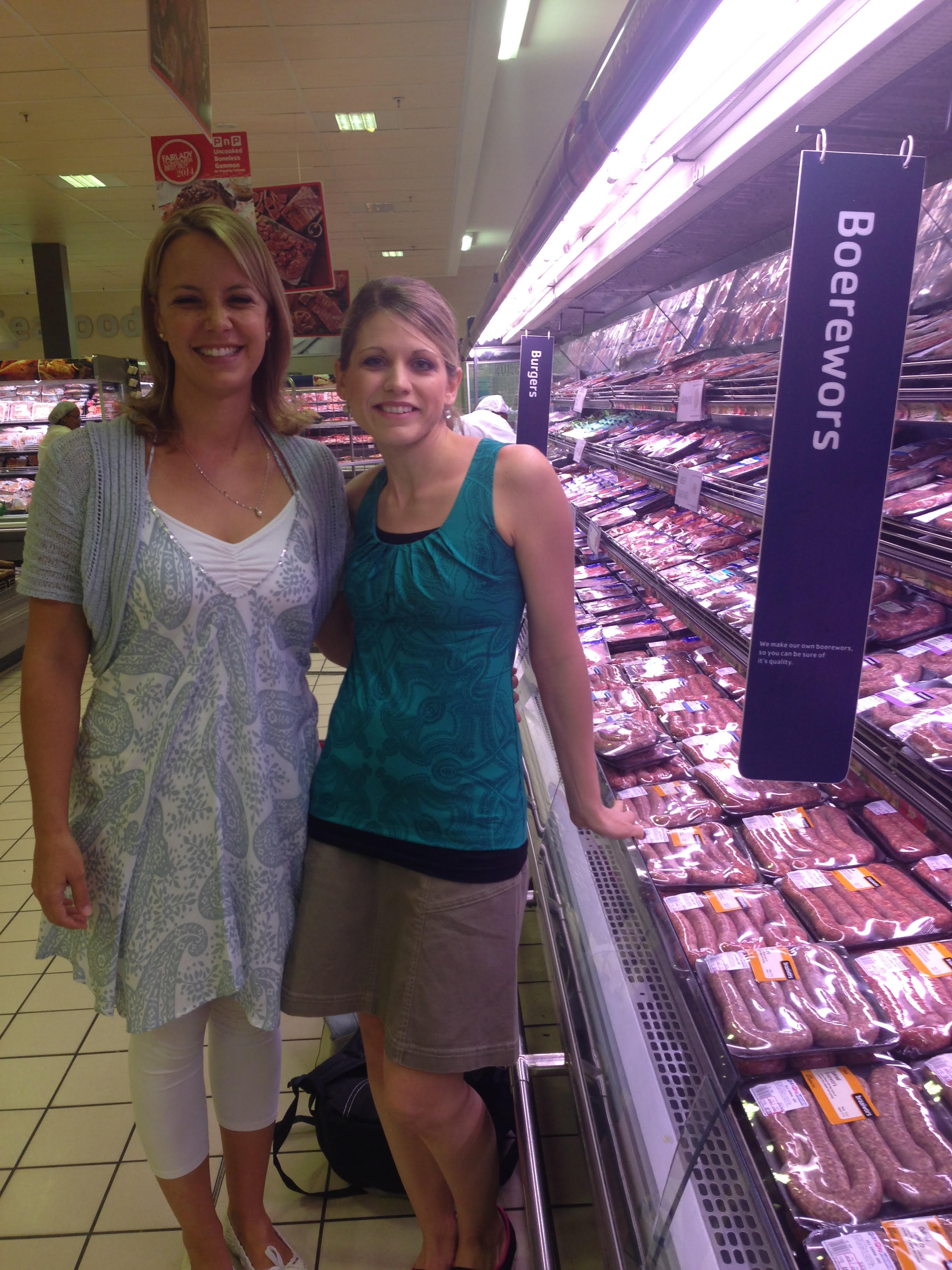 This is Annelien — an amazing South African woman who I absolutely adore and consider a dear friend now. She and her husband, Morne (the coffee-lover I mentioned above!) have two beautiful children and work closely with Lisa-Jo’s parents in the Take Action Ministry.

She used to work in a corporate job making a very good salary in Pretoria, but she recently left that job in order to work full-time with Help One Now and Take Action. She took a huge pay cut to do that, but by the fulfillment and joy the oozes from her, you’d never know. She was constantly beaming and is such a gracious and giving person. I want to live next door to her. But instead, I’m grateful for modern technology so we can keep up regularly!

We’re standing next to the Boerewors here — another very South African meat. It’s similar to what we’d call Brats in the states, only it’s more flavorful. 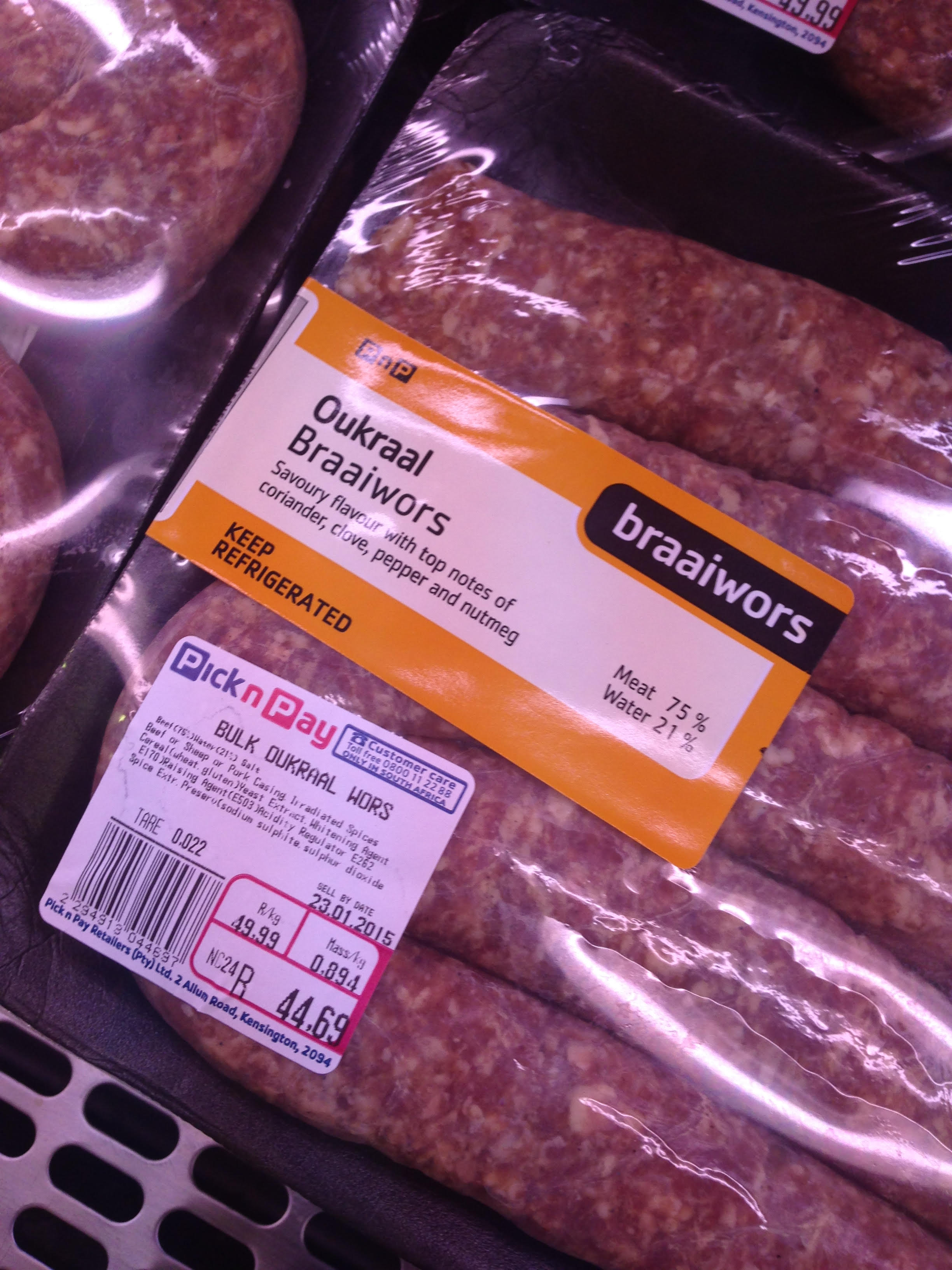 South African money is called “Rand” and 10 Rand equal $1 USD. So this package would be about $4.47 in US dollars. These were large packages of meat and $4.47 for one of them seemed like a steal to me! 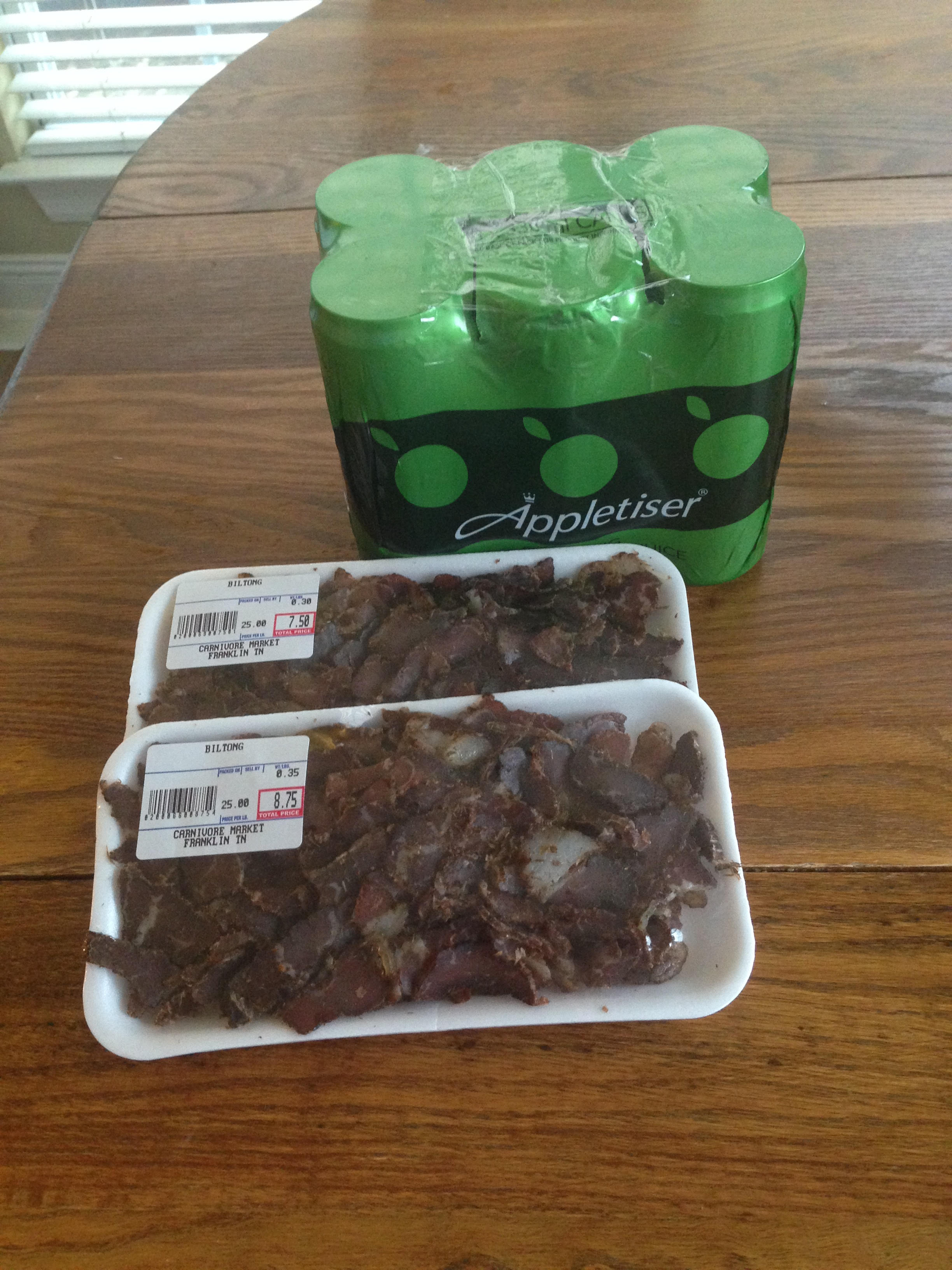 After coming home and raving about the food in South Africa, Jesse found a local meat shop that makes Biltong and imports Appletiser. Without even telling me, earlier this week, he went there and bought me some Biltong and Appletiser. Then he came home and handed me this brown paper sack saying, “I have a surprise for you!”

I truly could not believe my eyes when I opened it up and found Biltong and imported Appletiser. I was one happy girl!

P.S. Many of you asked if Lisa-Jo’s 9-year-old son, Jackson, could share about his experiences on the trip. You’ll want to be sure to hop over to her blog to read the interview she did with him about his perspective on the trip and what he thought about it all. It’s SO good!