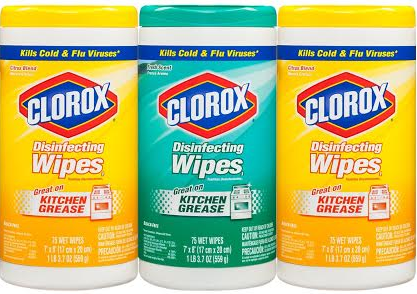 Here are some of this week’s best grocery & household deals from Amazon.com, courtesy of Terry and Mandi from Jungle Deals & Steals. Many of these prices are higher than what you’d pay by combining coupons with sales, but they may be good deals for you if you live where there aren’t many stores or deals are scarce:

Clorox: Clorox Disinfecting Fresh Scent and Citrus Blend Wipes are available for as low as $2.82/75-count canister ($8.47 for the pack of 3).

Kellogg’s: Pick up Kellogg’s Special K Vanilla Almond Cereal for as low as $2.26 for the 16.3-ounce box.

Speed Stick: Get this great deal on Speed Stick Gear Cool Motion Antiperspirant – now as low as $1.94 for the 2.7-ounce container.

Cottonelle: Cottonelle Ultra Comfort Care Double Rolls are available for as low as $0.43 each ($13.80 for the 32-count).

Terry & Mandi are a busy mother-daughter team that look for ways to save money without sacrificing a lot of time, and they share their love for all things Amazon.com at Jungle Deals & Steals.