31 Weeks to a Better Grocery Budget Video Series: How to Plan a Weekly Menu, Part 2

I’ve stooped to new lows, folks. I shot this right after working out, so I’m still in my workout clothes with “workout hair” and no makeup.

I planned to keep these videos really real so that you could feel like you were just coming into my home and we were chatting over coffee at my kitchen table. But I usually do try to change out of my workout clothes and put on make up before someone comes over. But oh well! 🙂

Websites referenced in this video: AllRecipes.com and SuperCook.com 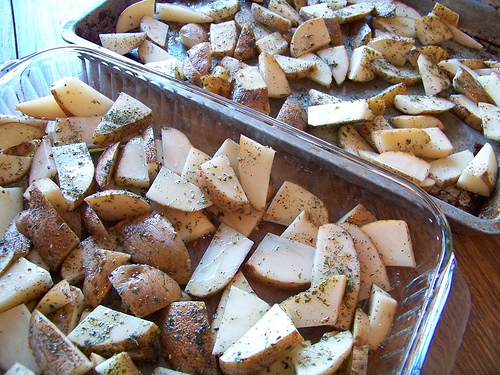 (Seasoned Baked Potato Wedges ready to go into the oven.)

How to Make Five Meals from Five Chicken Breasts 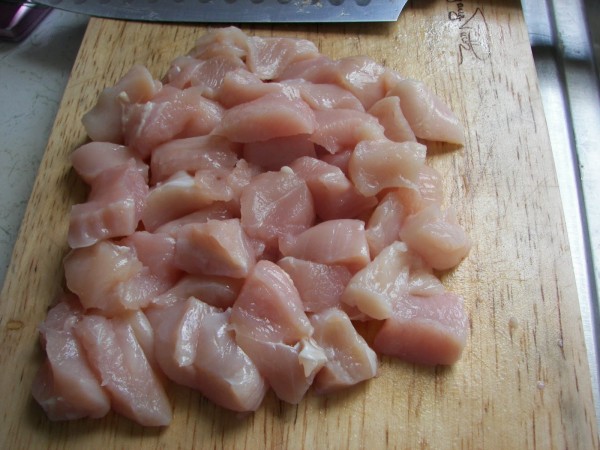 JessieLeigh from Parenting the Tiniest Miracles shows you how to make five meals from five chicken breasts. 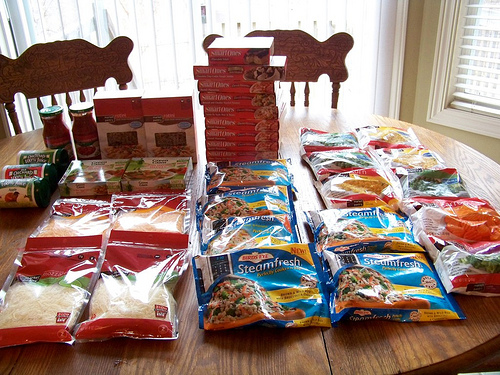 Today’s Target trip was similar to yesterday’s, only I paid a lot less out of pocket since I rolled the gift cards I had earned yesterday!

I used the $25 in gift cards that I earned yesterday to pay for my total, so I only ended up having to spend $6.25 out of pocket and then I got back $20 in Target gift cards.

We Paid Cash! :: Laptop and TV

A testimony from A. Ellis

My husband and I wanted to purchase a new LED television to replace a very old, very tiny 19” television in our bedroom, but decided it was definitely a “luxury” expense that would wait until we had saved up to pay in cash. In the meantime, we window-shopped the electronics stores and settled on the approximate type we hoped to purchase.

My high-school daughter also needed a laptop (we homeschool) so I needed enough to cover that (first priority) and the television (second).

I started shopping eBay and Craigslist for gift cards to the large electronics store where we planned to purchase the television. At the time, Bing was giving an extra 8% rebate for eBay purchases. Each time I found a gift card that would net me at least 15% off face value including all rebates, plus fees and postage, etc., I would purchase it using eBay rebate points (2%), Mr. Rebates (3%) and the Bing cashback program (8%). Example: I bought a $500 gift card for $475 ($25 off) + rebates (another $61.75 off) = $388.25 for a $500 gift card.

Once I had enough for the laptop, I waited a couple weeks for a sale on an appropriate model, and bought the loss-leader on the front page of the ad. Cost: Less than $250 (before tax) for a $589 laptop computer.

It took about eight months of being in the “right place at the right time”, but I finally accumulated about $2000 total in gift card value (for which I paid a total of less than $1485 after all rebates were factored in). We then waited until we received a coupon for a “free $50 gift card with purchase over $500” and started shopping for the TV.

Two weeks later, almost every LED TV in the store was featured in some type of “package deal” in which extra merchandise was included in the sale price of the TV. We settled on a LG 47” 1080i HD 120Hz LED television which was packaged with a LG Home Theater system including blu-ray player and five speakers, and an internet connection thumb drive, all for $1399 (regular price of TV alone $1699).

The gift cards I had saved up and purchased over time at a discount covered the price plus tax, and we had enough left over to buy my son a video game he had been wanting with a “10% off one full-price item” coupon (they wouldn’t allow use of this coupon on already sale-priced item, I tried!) and we also received the extra $50 gift card for a future purchase. 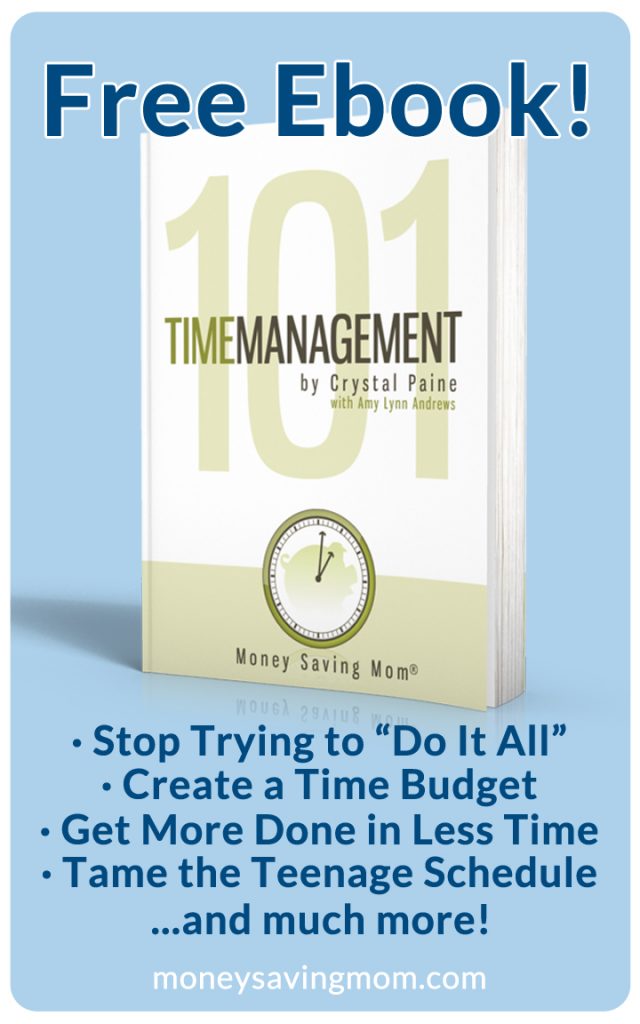 In the past year, I’ve received numerous emails from women begging me for my “secrets” to time management. They ask me to please share how I manage to seemingly “do it all”.

Every time I get an email like that, I wish I could invite the woman to my home. Because seriously, I think it’s easy to make bloggers out to be someone they are not when you’re basing all your conclusions of them upon the little sliver of their life that they share on their blog.

I know, because I’ve been guilty of it myself. I’ll read a woman’s blog, see the pictures and ideas she shares and begin to wonder if really and truly she might be superwoman’s clone. And I feel badly because I don’t measure up in any stretch of the imagination to this blogger. When in reality, I know good and well that every single woman has their strengths and weaknesses and no one has it all together.

–from the first chapter of Time Management 101

Thanks to the help of the wonderful Money Saving Mom® team, I’m excited to bring you a brand-new downloadable ebook, Time Management 101.

This 66-page ebook is a revised and edited compilation of my Time Management 101 series.

I hope it will be an encouragement to many of you! And if you know of someone you think it might be a blessing to, feel free to share the link or print out a copy and give it to them.

It’s in an easy-to-read, downloadable format. Just fill out the form below and you’ll get a copy in your email soon!